Yesterday, Senator Steve King (R-Mesa County) was indicted on three felony and two misdemeanor charges related to alleged theft of public funds and falsification of records. Today, Colorado Ethics Watch calls on him to resign from the Colorado Senate.

According to the Grand Junction Daily Sentinel, the 18th Judicial District Attorney's office filed a criminal complaint against Sen. King, alleging that he wrongfully took between $2000 and $5000 from the Mesa County Sheriff's Office and Colorado Mesa University, both part-time employers of Senator King. The article also states that the District Attorney is investigating Senator King for other possible criminal violations.

Although Senator King is not seeking re-election, he remains the Chair of the powerful Legislative Audit Committee. The Committee is scheduled to meet twice more before Senator King's term ends. [Pols emphasis]

"The people of Mesa County deserve better than a Senator facing felony charges for embezzlement from public entities," said Luis Toro, Director of Ethics Watch. "Senator King should step down immediately and allow a replacement to serve the remainder of his term." 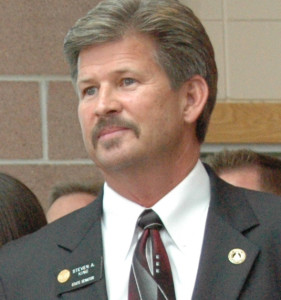 The complaint alleges King defrauded the Mesa County Sheriff’s Office and Colorado Mesa University of $2,000 to $5,000 between July 2013 and December. The Grand Junction Daily Sentinel reported Wednesday that no affidavit explaining the basis for the charges was filed.

Today, in a turn of events not altogether unforeseen by political observers, State Senator Steve King was charged with a series of crimes related to apparent irregularities in outside work that he did during his time in the legislature.

As ColoradoPols initially reported earlier this month, King was being paid for three different government jobs simultaneously. King was fired from the Mesa County Sheriff's office early in the summer for allegedly falsifying timecards. As the extent of the questionable behavior became public, King withdrew his candidacy for Mesa County Sheriff. Now, DA George Brauchler has filed a series of charges which include felony counts of embezzlement of public property, forgery and theft. He also was charged with misdemeanor counts of forgery and official misconduct.