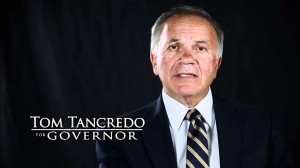 Tom Tancredo is best known for being a rattlesnake on immigration issues, but he's hard right on social issues too (e.g., he supports an abortion ban.).

In this conversation with KNUS' Peter Boyles last week, Tancredo says it's not what gay people do that bothers him. He says he doesn't care. But he does have a problem with gay people forcing hetero people, like him, to break their religious convictions in order to respect, include, or accommodate gays.

TANCREDO: Now, on the one hand, you know, Peter, our whole thing in this campaign and in my life is, essentially, “Look, I want to control just my own life. I don’t want to control yours.” Okay? That’s really and truly the bottom line for me. So, I don’t want to control the lives of people who have a different opinion about their sexuality and that sort of thing.
BOYLES: Pshhh! Who cares!
TANCREDO: I just don’t want them to try to control the lives of people –
BOYLES: Of others.
TANCREDO: –who have deeply held religious beliefs and are trying to, you know, adhere to them. And, so, that’s the only sticking point, here. And if it weren’t for that, I mean, I got no problems with this.

Listen to Boyles and Tancredo discuss why they want gays on an island 6.5.14

So Tancredo is saying, in a circular fashion, that he really doesn't tolerate gays at all, unless they could be on a planet-within-our-planet by themselves, where they wouldn't ruffle anyone's bogus religious convictions.

Would Tancredo say we should defend the right of a bully to punch someone in the nose? That's not an exact analogy, but discrimination and bigotry are actually pretty close to violence, especially in the big picture. Just ask a gay person who's been denied same-sex benefits, a lease, a job, opportunities for advancement, or a cake for their wedding, dear God.

Someone with a conscience in the KNUS studio needs to dump ice water on Boyles.