WEDNESDAY UPDATE #2: Would anyone care to speculate what nationally syndicated conservative pundit Michelle Malkin means by this?

Big congrats to @DaveBratVA7th – & kudos to @ingrahamangle for cranking it up. Anti-amnesty revolt has just begun. Colorado is next!

We assume she means Tom Tancredo, since Malkin is a Tancredo endorser, but the Tea Party is feeling kind of bold today. So maybe she means real, honest-to-Pete revolt.

[A]t least one man is attributing Cantor’s defeat to his unwillingness to defend gun rights — Dudley Brown, the executive director of the National Association for Gun Rights.

Tuesday night after Cantor’s defeat, NAGR celebrated on its Facebook page, reminding its 3.7 [million] followers of its role opposing Cantor and, more recently, supporting Brat, who filled out the organization’s survey, which guarantees its support. 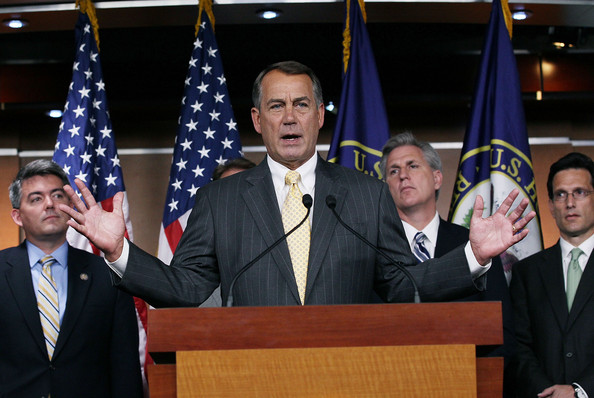 CNN reports on one of the more shocking and unexpected upsets in recent political history:

In what's being called a political "earthquake," the No. 2 Republican in the House, Eric Cantor, lost his primary on Tuesday to a college professor and tea party neophyte.

Cantor conceded the race with 99% of precincts reporting from the Richmond-area district showing him trailing Dave Brat 56% to 44%, according to the Virginia Secretary of State's website. Turnout was low.

"Obviously we came up short," Cantor said in his concession speech.

"It's disappointing sure but I believe in this country. I believe there is opportunity around the next corner for all of us," said Cantor, whose loss is all the more shocking because he's considered very conservative.

Mark Preston, CNN's executive political editor, said the defeat would have national implications since he has been viewed as ambitious and a potential speaker.

"This came out of nowhere," Preston said.

CNN Political Analyst David Gergen called it an "earthquake" that would "send shockwaves through the Republican ranks."

This is a jaw-dropping defeat for Rep. Eric Cantor, one of the most powerful Members of Congress and a longtime leader among House Republicans. The repercussions will be discussed for days and weeks, but in the short term, this could cause a significant fundraising blow for Republicans around the country; Cantor and House Speaker John Boehner recently completed a nationwide tour of vulnerable Republican Congressional Districts — including CD-6 Rep. Mike Coffman — but Cantor may have trouble getting his calls returned now. The Virginia Republican, and close confidant of Rep. Cory Gardner, is suddenly much less valuable as a fundraiser now, in part because of his own decision to create a House calendar that is among the lightest in history; it is an odd bit of irony that Cantor's reduction of the House workload essentially makes him a "lame duck" already.