Malkin to Fundraise for Pueblo GOP 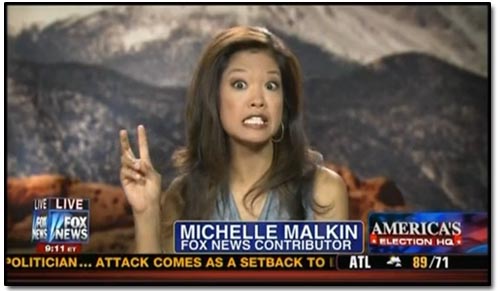 The Pueblo County Republican Party will be hosting our

Michelle Malkin will be our keynote speaker.

The dinner will be at Pueblo Community College –

The cost for the dinner is $50 per person.

Michelle Malkin and our slate of republican candidates.

Malkin has been pushing Benghazi hysteria, and criticizing Pelosi, Grayson, Reid, the Common Core, and most liberal commentators.  She is a supporter of Colorado's medical marijuana laws, and has visited Marisol Therapeutics in Pueblo West.  Malkin is based in Colorado Springs.

Michelle Malkin doesn’t run away from fights, she runs toward them. And she’s running faster than ever headlong into the 2014 Republican primary battles on behalf of upstart conservative candidates who are mounting insurgent challenges to the GOP old guard.

Malkin will probably teach Pueblo Republicans how to use social media more effectively; she is known for her 2 million Facebook and Twitter followers, and her snappy attacks on liberal and progressive targets.  She has also endorsed Tom Tancredo for Colorado's governor.