Last week 9News held a debate between Republican gubernatorial candidates Bob Beauprez, Scott Gessler and Mike Kopp (GOP frontrunner Tom Tancredo did not participate and continues to refuse any debate invitations). As we noted in this space, the candidates were asked about Cliven Bundy, the openly-racist Nevada rancher who has rallied armed supporters to back his refusal to recognize the federal government — primarily in order to avoid paying some 20 years worth of grazing rights fees — and all of the candidates came off as more or less supportive of Bundy. As Mike Littwin wrote for the Colorado Independent:

In summary, these people who want to be your governor seemed entirely unconcerned about someone bringing in his militia buddies to fight off the feds, whom he says he doesn't recognize as legitimate.

Why would Colorado Republican candidates even consider being supportive of Bundy? Because many right-wing Republicans and their Tea Party brethren apparently considered it some sort of conservative loyalty test, which is important for any candidate hoping to win a GOP Primary. Note that we wrote "considered," because even the most right-wing of right-wing groups would seem to have had a change of heart.

Consider this tweet from Americans for Prosperity (AFP) Colorado, the local version of the national group created and funded by the Koch Brothers. The image below is a tweet sent by AFP Colorado on April 19th in an effort to get more Republicans to join Sen. Rand Paul in supporting Bundy; as you can see, AFPColorado calls out Republicans as "wimps" for not following Paul's lead.

We've included the image here because AFP Colorado has since deleted this tweet. In fact, AFP Colorado has erased its entire Twitter history for most of the last two months, as you can see below (or on its Twitter page). At the time of this post, AFP Colorado's Twitter account shows only one tweet since February 20th — and no mention of the April 19th message above. The AFP Colorado account is far from inactive, having sent out 9 different tweets just today, so this was clearly an intentional scrubbing.

Americans for Prosperity had a tough week in Colorado last week, being forced to re-edit an anti-Obamacare, anti-Sen. Mark Udall ad just a few days after its planned Obamacare press conference imploded under the weight of a dubious key speaker. The scrubbing of its Twitter account is another very public sign that all is not well in Tea Party land. 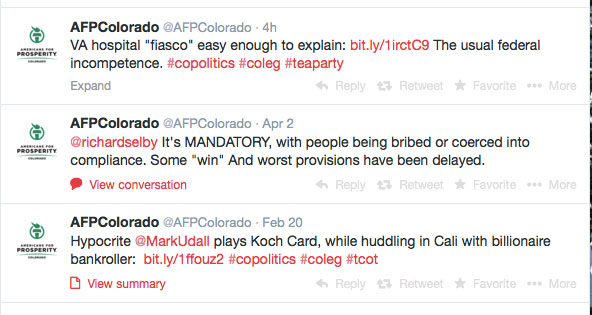