These Anti-Obamacare Ads Are Really Getting Stale

The problem is the photograph was taken two days after the July 2012 mass shootings at an Aurora, Colo., movie theater, when Udall and Obama visited a hospital to console the injured and families of the victims. Gov. John Hickenlooper, who was also on the scene, was cropped out of the advertisement.

Several families of the victims were quick to condemn the use of the photo, calling it “an utter disgrace.”

“To insinuate the somber expressions were for anything other than their compassionate response to our heartbreak is beyond unconscionable,” the families said in a written statement.

Americans for Prosperity quickly removed the photograph and apologized to the families, replacing the offending shot with another photo of the senator and the president — shown in a ghoulish shade as a female narrator criticizes Udall for his healthcare vote.

UPDATE #5: The original ad has now been taken down, but not before we grabbed a copy for posterity:

You can see the new version, without the photo from the Aurora shooting aftermath here.

"They will do anything and don't care who they hurt," [Sandy Phillips] said. "They took a picture showing great compassion for the parents and people of that shooting and made it twisted."

…The group has since removed the photo from the ad, said Adam Nicholson, state communications manager for AFP.

AFP's Colorado's director Dustin Zvonek said of pulling the image from its ad: "Fortunately we can and will change the image. Sen. Udall can't change his record that led to over 335,000 Coloradans receiving letters indicating that their health care policy had been canceled."

UPDATE #3: Via Eli Stokols, Americans for Prosperity is pulling and recutting the ad to remove the offensive image:

JUST IN: @AFPColorado tells me: "we can and will change the image. Senator Udall can't change his record.." #COpolitics #COsen

Had to get another shot in there, did they? This comes just as family members of Aurora shooting victims issue a statement demanding the ad be removed from broadcast:

Family members whose loved ones were killed in the Aurora Theater shooting on July 20, 2012, today issued the following statement in response to an AFP television ad attacking Senator Udall over Obamacare:

"The use of an image taken from the President's visit to Colorado to meet with us after our children were killed in the Aurora Theater shooting is an utter disgrace. And to insinuate the somber expressions were for anything other than their compassionate response to our heartbreak is beyond unconscionable. Americans for Prosperity is exploiting our tragedy for political gain and this ad should be pulled from the air immediately. We hope Colorado television stations will exercise sound judgment and not air this ad until AFP removes the image."

The second TV ad from the group Americans For Prosperity attacking Colorado Sen. Mark Udall focuses on the 335,000 health insurance policy cancellation letters mailed to Coloradans as a result of the Affordable Care Act that Udall supported.

That figure — 335,000 people whose “plans were cancelled due to Obamacare”, the ad’s narrator says — has been disputed by Democrats, who point out that 92 percent of those individuals were offered options to renew their coverage…

Additionally, Democrats criticized the AFP ad’s use of an photograph of Udall standing next to President Obama, both with somber expressions, as the narrator remarks “…all because Mark Udall said yes to Obamacare.”

The image was taken in July 2012 at Children’s Hospital in Aurora moments after Obama and Udall met with family members of those killed and injured just days earlier in the Aurora theater shooting.

“Republican, Democrat or unaffiliated, all Coloradans can agree that using imagery from a visit to comfort the victims of the tragedy in Aurora is out-of-bounds for political attacks,” Chris Harris, Udall’s spokesman, told FOX31 Denver Wednesday. [Pols emphasis]

UPDATE: The factual problems with Americans For Prosperity's newest ad (detailed below) are bad enough, but here's something else that is, or at least should be, offensive on a bipartisan level. 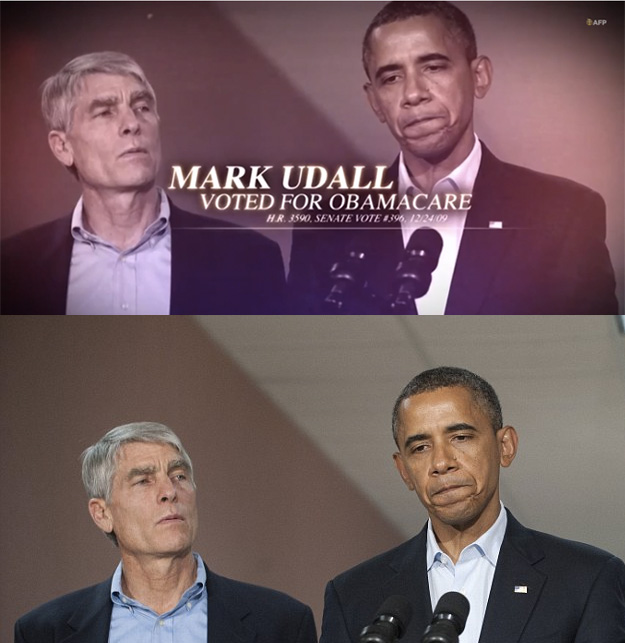 The image at the top can be found 18 seconds into AFP's TV spot. We immediately recognized it as a copyrighted Getty Images photo taken at University of Colorado Hospital in the aftermath of the mass shooting at the Century Theater in Aurora, Colorado in July of 2012. The official caption for this photo reads:

Folks, we've been through this before. Republicans seem to love misusing photos of Colorado Democrats from the aftermath of the Aurora shooting because they, you know, look sad. But if viewers knew why these Democrats looked sad in these photos, they'd be horrified. It's nothing short of abusive of this tragedy to use these photos completely out of context in a political attack ad.

Americans for Prosperity, if you want to spend hundreds of thousands of dollars running misleading ads with attacks that were debunked months before you ever filmed it, that's your prerogative. But for God's sake, show some common decency to the victims of the Aurora shootings and stop using these pictures. It's beneath all of us.

The Denver Post's Kurtis Lee reports on the new TV spot from conservative group Americans for Prosperity, which debuted this morning at a press conference featuring another dubious "Obamacare victim" we discussion yesterday:

A new TV ad unveiled Wednesday by the conservative group Americans for Prosperity hits U.S. Sen. Mark Udall for the nearly 335,000 health insurance policy cancellations doled out to Coloradans since the implementation of the Affordable Care Act.

“Your health plan, cancelled. All because Mark Udall said ‘yes’ to Obamacare,” says the narrator…

First of all, let us just say that the melodrama in this ad is comically over the top, with the first four seconds featuring a couple looking up at the camera so mournfully that it looks like an SNL skit. The voiceover narration practically hisses in anger, which is off-putting compared to the actress in AFP's prior ad–who was at least an engaging actress. This ad is just, for lack of a better word, shrill.

And as Lee continues, it's also factually incorrect:

The 335,000 figure on display in the AFP ad has been challenged by Udall, because about 92 percent of those people received renewal options for their health care policies. [Pols emphasis]

One of the central allegations made by Obamacare opponents in recent months has been the number of insured Americans whose health insurance was supposedly "cancelled." The 9NEWS Truth Test of AFP's previous ad singled this claim out as missing vital context:

It's true that millions of people with individual coverage got cancellation notices because their old plans didn't meet the standards of Obamacare…[b]ut getting one of these notices is not the same thing as losing insurance.

…[T]his ad is trying to make you believe that all those people just became uninsured, which is just not the case. [Pols emphasis]

In Colorado, as Lee notes once again today and we've explained over and over and over in this space, 92% of health insurance policyholders who received "cancellation notices" in fact received instructions for renewing their existing health plans. The claim that "335,000 Coloradans had their health insurance cancelled" may have been a potent talking point in January, but with the full facts now in view–that most were offered renewals, that the insurance marketplaces have signed up tens of thousands for insurance at far lower out of pocket cost, and most importantly, that the rate of uninsured Americans has plunged due to Obamacare–it's just ridiculous that we're seeing yet another TV spot based on this thoroughly-debunked "cancellation" falsehood.

But here you go, folks. And we doubt it will be the last.