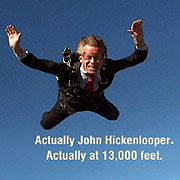 His opponents are the ones dropping like a rock.

​Lynn Bartels of the Denver Post is first to write up today:

Gov. John Hickenlooper beats all four Republican rivals in a new poll that shows he's favored by women voters and has a slight advantage with crucial unaffiliated voters.

Of the four GOP candidates on the primary ballot, former Congressman Tom Tancredo presents the stiffest challenge to Hickenlooper, but loses to the Democratic governor by 7 percentage points, according to a Quinnipiac University poll released Wednesday morning.

"Strong support from women and an edge among independent voters give Colorado Gov. John Hickenlooper a solid foothold in his reelection effort," said Tim Malloy, assistant director of the Quinnipiac University poll.

Looking beyond the gubernatorial race, it's certainly not all good news for Democrats in today's Q-poll: the same poll that gives Hickenlooper a decisive edge over his opponents demonstrates ongoing confusion among voters over the gun safety legislation passed by Democrats in 2013. 56% of respondents still oppose "the state's stricter new gun control laws," even while they support universal background checks for gun purchases–one of those very same laws–by an overwhelming 85%. Only 34% of respondents say the General Assembly is doing a good job. Note that the question isn't qualified by partisanship, but it's a Democratic majority in both chambers.

Bottom line: it doesn't surprise us to see Hickenlooper pulling away from a pack of undistinguished GOP candidates, who are in many ways more liabilities to their party than assets. Assuming that trajectory continues, Democrats can start looking at ways to trickle Hickenlooper's strength down the ticket–where it's very much needed.