WEDNESDAY UPDATE: It would appear that the press isn't buying what AFP is selling. 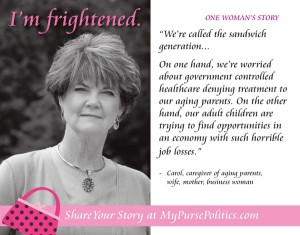 A press release from conservative advocacy group Americans for Prosperity announces a press conference tomorrow at the Colorado Capitol, going after Democratic Sen. Mark Udall (who else?) for his support of Obamacare (what else?):

This Wednesday Americans for Prosperity – Colorado will hold a press conference on the west steps of the state capitol with AFP President Tim Phillips, Senate Minority Leader Bill Cadman, and Carol Perry, a Coloradan whose health insurance premiums have spiked due to ObamaCare. The presser will explain AFP’s goals in holding Senator Mark Udall accountable for his support for ObamaCare.

Being inclined as we are, after so many "Obamacare horror stories" have collapsed under minimal scrutiny, to approach supposed victims of the Affordable Care Act trotted out by Americans for Prosperity with a jaundiced eye, we did some basic checking on "Obamacare victim" Carol Perry. And once again, we're really glad we did! Pay attention, reporters covering tomorrow's presser:

According to the Colorado Secretary of State's office, Carol Perry of Douglas County has donated thousands of dollars to Republican candidates, including Mitt Romney, Ryan Frazier on the federal side, and Tom Tancredo's 2010 gubernatorial campaign. Perry's Secretary of State records also show a donation of $100 for an unknown purpose to Kelly Maher, now the director of conservative group Compass Colorado. We're not sure why that donation to Maher is even in the campaign finance system, as we don't think Maher has been a candidate. But needless to say, it's a huge red flag when evaluating Perry's authenticity.

Perry also appears to be a frequent witness in favor of Republicans on a wide variety of issues. We've found records of her testifying against last year's gun safety bills. In the 2012 elections, Perry was a public face of My Purse Politics (photo above right), a a project of the Conservative Women's Alliance aimed at turning out the woman conservative vote. But one of the most amusing, and telling, press hits for Carol Perry came last June in testimony on the lack of respect for "political diversity" at the University of Colorado:

Carol Perry, who testified to the board, said she would never send her daughters to CU because of what she perceives to be a persistent liberal bias.

So, does this mean Carol Perry might not be the most reliable source on the horrors of Obamacare, much like other "horror stories" hyped by Americans For Prosperity in ads ruled "misleading" by fact-checkers from coast to coast? Obviously, we haven't heard her particular story yet, so there's no way we can say that for sure.

But based on what we know about AFP and now Mrs. Perry, we're more than a little skeptical.