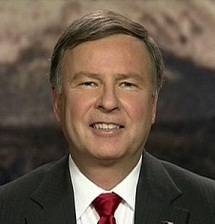 Rep. Doug Lamborn must work harder in order to do the minimum.

Fundraising reports for the first quarter of 2014 became available this week, and Colorado's own Rep. Doug Lamborn has reached a new pinnacle of shittiness: No incumbent Member of Congress raised less money than Lamborn in the first three months of the year. Nobody. In the entire United States.

Lamborn raised a grand total of $38,253 in Q1, an amount so miniscule that the four-term Congressman had to loan his campaign $100,000. As Megan Schrader of the Colorado Springs Gazette reported on April 15:

Lamborn was forced into an unexpected primary last week when Republican challenger Bentley Rayburn won support from enough state delegates to get his name on the June 24 primary ballot.

Rayburn, who entered the race late, won't be required to file a quarterly report showing his campaign finances to the Federal Elections Commission until after the primary election. Rayburn said he'll begin filing his official candidate paperwork in late May.

In the meantime, Lamborn may also be feeling pressure from Democratic candidate Irv Halter, a retired Air Force major general, who last quarter brought in $165,095 in contributions and had $217,432 cash on hand at the end of March. Records indicate Halter has given himself about $32,000 since he entered the race.

We've been wondering aloud if 2014 might be the year that Lamborn's overall ineptitude (both as a candidate and a Congressman) catches up to him. Lamborn has survived challenges from the right, left, and everywhere between since he was first elected in 2006, so perhaps it is hard for him to really gear up for election season. But there is no reason for Lamborn to be this bad at raising money — so bad that he has to guarantee a $100,000 loan to his own campaign. Keep in mind here that Lamborn is not independently wealthy, so a $100k loan is a very real amount of money for him that is a bit of a risk; if Lamborn doesn't win the June Primary, he's going to have a hell of a time trying to convince anyone to give him donations to help pay off his campaign debt. All of this could have been avoided had Lamborn just taken a little time each quarter to raise money and build up a modest warchest larger than the $123,000 he had in the bank before his loan.

Maybe Lamborn defeats Rayburn and holds off Democrat Irv Halter to win re-election in November. But what Lamborn is doing is exactly how an incumbent ends up losing an otherwise safe seat.

It only requires a little bit of effort to maintain your hold on a district like CD-5. Lamborn has yet to reach that minimum.