UPDATE: Here's a clip of Rep. Kevin Priola from yesterday's debate over Rep. Jim Wilson's amendment to House Bill 14-1292. The tension then brewing over Priola's opposition to this mostly GOP-supported amendment is clear in his voice: 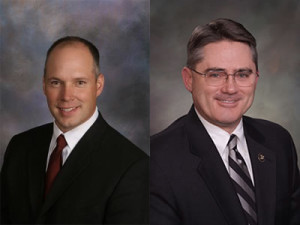 Priola had alienated many of his fellow GOP colleagues a day earlier when he declined to support an amendment to the Student Success Act sponsored by Rep. Jim Wilson, R-Salida, that most Republicans supported.

Priola hadn’t paid Wilson, one of the more popular members in the caucus, the courtesy of informing him ahead of time that he wouldn’t be supporting his amendment related to a transparency website to show how school districts spend public money.

The Denver Post's Anthony Cotton has a little more reaction from Republicans:

According to the Republicans, part of Priola’s job as Whip is to determine where the membership stands on the issues and help align support within the party–on Wednesday, party members say, Priola not only failed to do that, he argued on the floor in favor of Hamner’s amendment over Wilson’s.

When Hamner’s amendment was passed in a close vote, it led to Thursday’s move by Rep. Chris Holbert, R-Parker, to have Priola removed.

“We were shocked and disappointed that happened,” Holbert said. “He should have let us know his position and we could have made adjustments.”

In the end, despite the push from Rep. Chris Holbert to remove Rep. Kevin Priola from his Minority Whip position on the spot today, minority caucus chair Rep. Kathleen Conti scuttled the move by ruling the motion out of order–as Priola hadn't resigned, the position technically wasn't "vacant." This would clearly indicate that Minority Leader Brian DelGrosso  was not on board. Originally, as Stokols reports, an angry GOP caucus was prepared to oust Priola, as indicated by an initial vote against adjourning the meeting of the caucus. After Conti ruled the whole business out of order, a second vote to adjourn passed.

So what really happened today? For the best clue available, we turn to Rep. Frank McNulty:

The attempted coup, whatever vote precipitated Thursday’s meeting, has been a long time coming, according to several House Republicans who describe a widening gap between the caucus’s moderate and conservative wings.

“This isn’t about the amendment yesterday,” said Rep. Frank McNulty, R-Highlands Ranch. “This is about personalities.”

By all accounts, this has been a very frustrating legislative session for the conservative wing of the GOP House caucus. After the success of last year's recall elections against two sitting Senators and the resignation of a third, conservatives expected to vigorously oppose Democrats at every step, setting the stage for a clear election season distinction. Instead, as we've recounted in this space, the base GOP outrage they hoped to sustain into this year has fizzled, and the GOP caucus took heavy criticism for dead-end ideological flights of fancy like the abortion ban bill. This incident over a relatively obscure Democratic amendment supported by Priola–which apparently didn't even pass on clean party lines, with several Democrats voting against along with most of the GOP–appears to ripped the scab off of a much larger intra-caucus disagreement.

Judging from the unsatisfying end of today's blowup, we've probably not heard the last of it either.