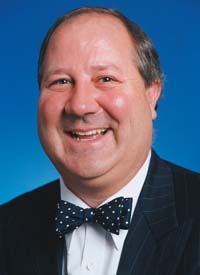 As the Boulder Daily Camera's Sarah Kuta reports, the University of Colorado's "visiting conservative scholar," Dr. Steven Hayward, who we've discussed a few times in this space, is indeed giving CU students badly-needed exposure to political opinions not generally found on traditionally liberal college campuses. That was the purpose, after all, in GOP kingpin turned CU President Bruce Benson and Republican CU Regents creating the "visiting conservative scholar" program to begin with. To expose college kids to conservative views.

If anything, it appears that Dr. Hayward is doing his job a little too well:

Student leaders at the University of Colorado are speaking out against Steven Hayward, the university's first-ever visiting scholar in conservative thought, for statements he made in a recent interview and in a blog post…

The student leaders pointed to a post Hayward wrote on the blog PowerLine in October titled "Off on a gender-bender," in which he described his discomfort and confusion after attending an orientation for new faculty members about gender identity.

Hayward poked fun at members of the lesbian, gay, bisexual and transgender community in the same blog by writing: "LGBTQRSTUW (or whatever letters have been added lately)." [Pols emphasis]

He also wrote that he doubted any students had ever told a professor about their preferred gender pronouns or asked to be called by a different name.

If turning the acronym "LGBT" into a gratuitous alphabet soup, a slur which seems more at home on the Rush Limbaugh radio show than the work of a professor at our state's flagship university, isn't enough for you, it gets even better. Check out how Dr. Hayward recommends CU philosophy professors deal with that department's recent sexual harassment scandal:

Hayward suggested that victims should deal with their harasser directly.

"Well, I don't know, my mother and my mother-in-law both said, 'You know when those kinds of things happened to us, usually a lot worse 40, 50 years ago when they were in the working world, they slapped people,'"  [Pols emphasis] Hayward said in the interview. "Maybe we ought to get back to that."

Because, you know, slapping people in the workplace goes over so well! Why follow the laws that allow victims to hold their harassers accountable when you can just slap them and be done with it? Despite the superficial allure, something tells us that an outbreak of harasser slapping in workplaces around the country would not be greeted well by Dr. Hayward's financial backers.

Again, Dr. Hayward was brought to the CU campus to help supplement a perceived lack of "conservative thought."

Mission accomplished, though he may result in CU creating more liberals.