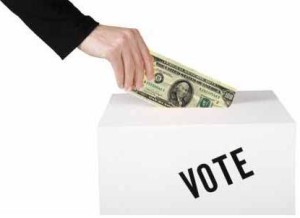 The Washington Post reports, and you'll be seeing the impact soon:

A split Supreme Court Wednesday struck down limits on the total amount of money an individual may spend on political candidates as a violation of free speech rights, a decision sure to increase the role of money in political campaigns.

The 5 to 4 decision sparked a sharp dissent from liberal justices, who said the decision reflects a wrong-headed hostility to campaign finance laws that the court’s conservatives showed in Citizens United v. FEC , which allowed corporate spending on elections.

“If Citizens United opened a door,” Justice Stephen G. Breyer said in reading his dissent from the bench, “today’s decision we fear will open a floodgate.”

The ruling doesn't get rid of the individual federal candidate contribution limit of $2,600, but it does strike down the aggregate limit of $48,600 in hard money donations to candidates in a two-year election cycle. That means wealthy donors to candidates won't have to pick and choose who to donate to to stay under an overall cap. Now, at least in theory, everybody can have a check.

In an era where unlimited soft money has already made candidates' own fundraising of secondary importance in overall political spending, this decision will likely have an incremental not sweeping effect. But for those of you who would prefer less money flooding the political system–which is, not surprisingly, usually people without as much money–this was not a good decision for your small-d democracy.