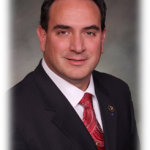 Among the many candidates who made appearances at Saturday's county assembly for the Jefferson County Republican Party was a familiar name to Arvada voters: one Robert Ramirez.

Ramirez has officially filed his paperwork with the Secretary of State's office to once again run for the State House in HD-29. In 2010, Ramirez defeated incumbent Democrat Debbie Benefield by less than 200 votes to win a seat that probably gave Republicans their short-lived majority in the State House.

In the following two years, Ramirez made multiple campaign blunders and odd policy statements, a combination that ultimately saw Democrat Tracy Kraft-Tharp re-take the seat for Democrats in 2012 by a solid 51-43 margin. It's difficult to say whether Ramirez is serious about running a real campaign in 2014, given his late entry into the race, or if Republicans just asked him to put his name on the ballot. If you look at his campaign website, it appears to be unchanged from sometime after he was first elected in 2010.