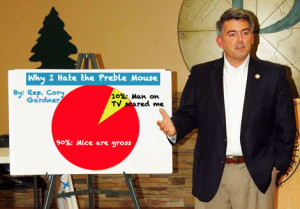 Now, Udall’s campaign is quickly shifting gears, going on offense and trying to define Gardner early in the race as someone whose conservative voting record is outside the mainstream — more conservative even than Ken Buck, one of the former GOP Senate hopefuls now planning to run for Gardner’s House seat.

“We’ve swapped one reckless Tea Partier for another,” said Udall’s campaign manager Adam Dunstone. “But unlike Ken Buck, Congressman Gardner will be held to account for the out-of-touch votes he cast in Congress. His voting record placed him in the top ten most conservative members of the House, while radicals like Rep. Tom Tancredo never cracked the top 50.”

That ranking is courtesy of National Journal, which ranked Gardner as the 10th most conservative member in the House based on his votes in 2012…

…[The Udall] campaign deeply believes that once voters in this rapidly changing state learn more about Gardner’s votes, they’ll find him similar to Buck, no matter how smooth a talker he may be.

We've said as much about Gardner in this space before. Once the newness of Gardner's campaign has passed, and both the media and voters turn more attention to Gardner's recent history, it's difficult to see how Cory can present himself as more moderate than Ken Buck. It's going to be even more difficult for Gardner than it would have been for Buck to run a strong "anti-incumbent" message when Gardner is a sitting member of Congress; there's a reason that the press releases sent out by Udall's campaign use "Congressman Cory Gardner" in the header image.

As for Gardner, he seem to be betting the farm that he can beat Udall by saying the word "Obamacare" repeatedly. Again, from FOX 31:

When asked about his record at his campaign kickoff event Saturday morning, Gardner offered a response that likely encapsulates his campaign strategy of focusing almost exclusively on Obamacare, which Udall supported.

Gardner can certainly get some traction by attacking Udall on Obamacare, but there's no way that will be enough to win this race in November (assuming Gardner gets through a Republican Primary). Gardner's low statewide name ID means that he must define himself as well as attack Udall — and he must do it before Udall does it for him (see above). As we saw in 2008, merely repeating the same thing over and over again (ie, "Boulder Liberal" Mark Udall) isn't a very sound strategy for winning a U.S. Senate seat.