Stopping short of apologizing for mag comment, Herpin thanks Boyles for being “fair and balanced,” and Boyles calls Stokols a “Butt Boy”

FRIDAY POLS UPDATE: Something more like an apology now from Sen. Bernie Herpin, as reported by the Colorado Springs Gazette's Megan Schrader today:

Sen. Bernie Herpin, a Republican, said he was trying to make a point about how last year's Democrat-sponsored gun laws have been ineffective in reducing gun violence.

"There's nothing I can say to relieve their pain; I certainly didn't intend to add to their pain," Herpin said.

But talk of his comments has spread rapidly and so has the criticism. [Pols emphasis] 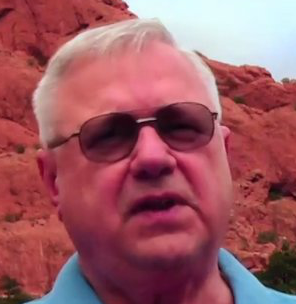 Herpin and Boyles were angry over Fox 31 Denver coverage of Herpin's statement that it was "maybe a good thing" that the Aurora m0vie-theater shooter had a 100-round magazine.

Asked by Boyles' about Stokols' coverage, Herpin said this morning, "As a media person you know it's their job to sensationalize the news to attract readers and viewers and followers on their blogs."

"Fortunately, we have people like you that stand up for us, that provide both sides of the story in a fair-and-balanced way," Herpin told Boyles. "And I thank you for that."

"Well, you're kind," responded Boyles, who really truly expressed his "love" Herpin earlier in the interview.

After I tweeted Boyles' conversation with Herpin, "Missing Pundit" responded with "Live from Kenya," referring to Boyles' birther obsessions.

Herpin stopped short of apologizing for his comment about the 100-round magazine, telling Boyles, "I certainly meant no disrespect to people."

Boyles' substantive criticism of Stokols' reporting was that Stokols didn't include the full context of Herpin's quote until the lower portion of Stokols' post. There, Stokols wrote: "Herpin was trying to say that larger magazines are less reliable, more prone to jamming up." And then he provided Herpin's full comment with video.

That doesn't sound like reporting from a Butt Boy, whatever that means.