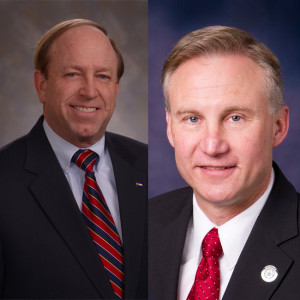 The Democratic candidate for Colorado attorney general says the state’s voter-approved ban on same-sex marriage violates the constitutional rights of gay couples and that the law shouldn’t be defended.

Don Quick made the comments Tuesday morning, putting the issue into the spotlight in the state’s attorney general race months before voters head to the polls. Quick, the former Adams County district attorney and former deputy state attorney general, emphasized that those positions have a responsibility to defend state laws regardless of whether the officeholder agrees with them.

As the Denver Post's Tom McGhee reports, outgoing GOP Attorney General John Suthers has a newly defensive response to the question of defending Colorado's constitutional ban on same-sex marriage, in contrast to much less equivocal justifications in the past:

Suthers' spokeswoman Carolyn Tyler said that her boss has little choice but to defend Colorado's Amendment 43, which defines marriage as a union between one man and one woman. It was approved by voters in 2006.

"The attorney general has an obligation to defend state laws until they are determined to be unconstitutional by the highest court, regardless of whether or not that puts the attorney general on the wrong side of history," Tyler said. [Pols emphasis]

Even an indirect acknowledgement that continue to defend the state's same-sex marriage ban places Suthers "on the wrong side of history" could be seen as a win for equality supporters. In a Washington Post guest opinion earlier this month, Suthers further explains his reasons for continuing to defend Colorado's ban on same-sex marriage–again, with no mention of his longstanding personal opposition to gay marriage:

I fear that refusing to defend unpopular or politically distasteful laws will ultimately weaken the legal and moral authority that attorneys general have earned and depend on. We will become viewed as simply one more player in a political system rather than as legal authorities in a legal system. The courts, the governments we represent and, most important, the people we serve will treat our pronouncements and arguments with skepticism and cynicism.

Quite the principled guy, right? There's just one problem: Suthers doesn't always follow his own rule. As Westword's William Breathes reported last June, Suthers certainly does feel entitled to make judgments on the constitutionality of some Colorado laws, and whether a law is "worth defending" in court:

Despite the attempts of Colorado lawmakers to put marijuana-centered magazines behind the counter at booksellers and convenience stores like pornography, pot publications won't have to be hidden from view.

"No magazine whose primary focus is marijuana or marijuana businesses is required to be sold only in retail marijuana stores or behind the counter in establishments where persons under twenty-one years of age are present, because such a requirement would violate the United States Constitution, the Colorado Constitution, and section 24-4-103(4)(a.5)(IV), C.R.S."

To summarize: Suthers can't answer the question of the constitutionality of Colorado's same-sex marriage ban, even as courts across the nation strike down bans just like it as unconstitutional–but Suthers gets to decide another Colorado law on displaying marijuana magazines is unconstitutional, and opt out of defending it? How is this not a blatant double standard?

Don Quick isn't running against Suthers this year, but you can certainly see what he's getting at.