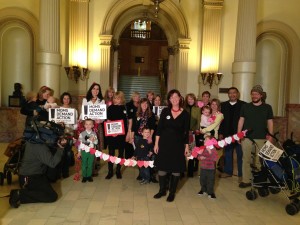 A Democratic House Judiciary Committee voted 7-4 to reject another Republican bill to expand gun rights. The bill would have allowed school districts to decide if they wanted to let teachers, not just designated school resource officers, carry concealed weapons…

Supporters of the idea were far outnumbered by teachers and students who packed the hearing to speak against the idea. [Pols emphasis]

"There's no reason for teachers to have guns in school when we're trying to keep guns out of schools in the first place," said Karina Vargas, who was paralyzed in 2010 from a shooting outside Aurora Central High.

Gun control advocates, who want fewer firearms in schools, not more, again packed the hearing room at the Capitol Tuesday, intent on demonstrating strength — and staunch opposition to the proposal to allow willing teachers and school staffers to serve as a first line of defense in the instance of a school shooting.

“We have officers who are trained in responding to these incidents, and now we’re adding to that people who don’t have that training,” said Michael Eaton, the chief of security for Denver Public Schools…

After all the supporters of the proposal had finished testifying, the committee continued to hear from the bill’s opponents for another two hours as gun control advocates — even knowing the committee’s vote was likely to go their way — pressed their points. [Pols emphasis] 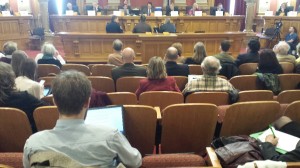 ​At this point, quite a number of Republican proposals to repeal the gun safety legislation passed in the 2013 session of the Colorado General Assembly have been heard, but despite calls by the Rocky Mountain Gun Owners and other groups for protests and mass testimony, nothing like the pandemonium seen at the Capitol last year has materialized. Despite excuses now being made, this does not appear to have been the intention of the gun lobby, who urged their supporters to turn out in large numbers or risk "emboldening the left."

It doesn't matter if gun rights supporters now consider their protests "futile" in the face of Democratic control of the legislature–this is an election year, and the failure to hold together the angry momentum they worked so hard to cultivate in 2013 is a major turnaround that will hurt Republicans this November. That failure is already evident in polling that shows public support has actually grown in Colorado for universal background checks and the magazine limit law, even as the gun lobby assailed them 24/7.

As for this particular piece of legislation, allowing teachers to carry concealed weapons, it's been suggested to us that the whole emotional push by Republicans for this bill in the wake of last December's shooting at Arapahoe High School may have been a misguided waste of everyone's time. In 2003, the GOP-controlled Colorado legislature passed the Concealed Carry Act of 2003. This legislation, signed into law by Republican Gov. Bill Owens, appears to allow school districts to designate anyone they wish as a "security officer" (not an official title that requires any training, mind you), and the law specifically allows persons so designated to carry concealed weapons on school grounds.

A permittee who is employed or retained by contract by a school district as a school security officer may carry a concealed handgun onto the real property, or into any improvement erected thereon, of a public elementary, middle, junior high, or high school while the permittee is on duty;

As we understand it, this 2003 law allows school districts to designate "security officers" who can carry concealed weapons. And if they really wanted, there's no reason why that couldn't be teachers. Note that we're not making a judgment about the efficacy of arming teachers, which as you can read above, far more witnesses turned out to testify against than in favor of. What we're saying is, it appears that yesterday's debate over arming teachers, in addition to being emotionally manipulative so soon after the Arapahoe High School shooting, was superfluous.

And that kind of puts the proverbial cherry on top of their failure.