This Week: Get Ready For Magazine Ban Mayhem, Maybe 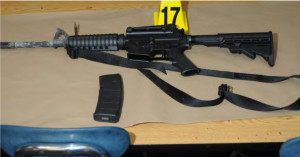 Holbert's repeal attempt is scheduled to be heard by a House committee Monday, and a separate but identical proposal in the Senate is expected to have a committee hearing there Wednesday.

The magazine restrictions were among a handful of gun-related laws that Democrats passed in the aftermath of mass shootings in a suburban Denver movie theater and Connecticut's Sandy Hook Elementary School. One of those laws expanded background checks to private and online firearm sales.

A Republican attempt to undo that law has already failed.

Democratic Rep. Rhonda Fields of Aurora, who sponsored the magazine limits and the expansion of background checks, said she believes Colorado residents support the measures, and that they'll come out in big numbers to testify against repeal efforts.

The latest Quinnipiac University poll of Colorado residents, out last week, shows once again that the strongest public support among the different gun safety bills passed by the Colorado General Assembly in 2013 is for requiring background checks for all sales of guns including private sales. While support for universal background checks on guns is at no-brainer upper 80th percentile levels, the question of limits on the capacity of gun magazines is much more divisive. The latest Quinnipiac poll is in fact the first polling we've seen in Colorado showing support for Colorado's new magazine limit law at 50%, with 47% opposed. It's notable that support for this law has grown slightly, perhaps more importantly not declined, even as the gun lobby raged against it all last year.

As we indicated at the time, the committee fight over repealing last year's universal background check law, House Bill 13-1229, was anticlimactic in comparison to last year's huge mobs of opponents who flooded hearings and circled the Capitol laying on their car horns. In the Senate State Affairs Committee's hearing on the Senate background check repeal bill, many more witnesses appeared to testify in favor of background checks than against. If Republicans are going to make an election-year stand anywhere to placate the gun lobby and the issue's vocal "grassroots," the magazine limit is the place. It bears repeating–much of the anger over Democrats' "gun control agenda" last year was the product of either outright misinformation, or so-called "flanking bills" like the assault weapons liability measure that were ultimately killed. In retrospect, the flanking bill strategy was probably a bad idea, as it gave opponents fuel even after those more onerous bills were killed. But that debate is over.

The magazine limit law is, as we've been forced to spend a lot of time on in this space, a major point of public misinformation. We believe that if the media had gotten this story anywhere close to right after the passage of House Bill 13-1224, support for the new law would be considerably higher than polls suggest today. Democrats should use these hearings as an opportunity to demonstrate how basic facts have been misrepresented in the local press and by the gun lobby, every bit as egregiously as Victor Head unwittingly confessed to last week.

Hopefully, we won't learn that "removable baseplates" got him lots of signatures.