Republicans Give Up on Trying to Beat Perlmutter

In a year in which Republicans are having trouble fielding exciting candidates for U.S. Senate or Governor, it should come as little surprise that they aren't going to put up a strong candidate against incumbent Democratic Rep. Ed Perlmutter in CD-7. As Lynn Bartels noted in "The Spot," Republican Don "Can I Buy a Vowel" Ytterberg will kick off his campaign for CD-7 on Wednesday. 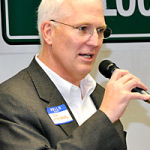 Don Ytterberg. Yes, that’s how you spell it.

Ytterberg, the CEO of a metal finishing company in Arvada, lost a bid for State Senate in 2008 to Democrat Dan Gibbs of Summit County. Most recently, Ytterberg served as the Chairman of the Jefferson County Republican Party, a position he resigned late last year. Ytterberg isn't a terrible candidate, but he's definitely more of a ballot filler than a true challenger; he's not dynamic or interesting enough to pose a real threat to Perlmutter, which has a lot to do with Perlmutter himself.

Since first winning election to CD-7 in 2006, Perlmutter has cruised to re-election every two years no matter the opponent. In the Tea Party wave year of 2010, Perlmutter crushed Republican Ryan Frazier 53-42. Even after redistricting made CD-7 more competitive in 2012, and with a wealthy, well-known opponent in Joe Coors, Perlmutter still won by a 53-41 margin.

Given Perlmutter's obvious hold on the district, we've been wondering when Republicans would finally give up trying to make a serious run at the Jeffco native — and it appears 2014 is that year.