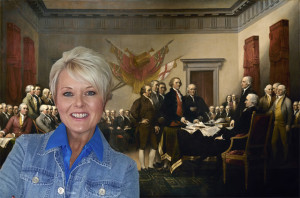 A great story from the Colorado Independent's John Tomasic late Friday explores another significant problem for GOP U.S. Senate primary contender Amy Stephens. Despite a growing amount of support for Stephens from local GOP insiders (and, most suspect, DC-based Republican heavies like the National Republican Senatorial Committee), Stephens' candidacy has failed to gain traction with rank-and-file Republicans. A major reason for this is Stephens' support in the Colorado legislature for Senate Bill 11-200, the bill that created Colorado's new health insurance exchange. Even though Colorado's health insurance exchange appears to be working well after a rough start, and was supported by business interests across the state in addition to Democrats, its origins as a key part of the Affordable Care Act, a.k.a. Obamacare has made the insurance exchange a critical liability for Stephens with GOP primary voters.

And as Tomasic of the Independent reports, "Amycare" isn't the only base relations hurdle for Stephens:

It’s in [the context of "Amycare"] that, when Udall announced at the end of last year that he had helped negotiate the end to the rough eight-year battle around the U.S. Army’s proposal to expand its Pinon Canyon training site in southeastern Colorado, the Stephens campaign must have breathed a sigh of relief. Because, as far as conservative Colorado voters go, Stephens was on the wrong side of that litmus-test issue, too.

Ranchers have worked the wide brushland around Pinon Canyon for generations. And for nearly a decade, they watched with grave concern and growing anger as the Army sought to acquire enormous swaths of the area for its expansion plans. The ranchers had good reason to be wary.

The existing 240,000-acre maneuvering ground was seized by the Army in the 1980s through eminent domain from residents who refused to sell. It was a bitter pill to swallow at the time but it seemed only an early small dose of a larger toxic prescription when in the mid 2000s the Army floated a proposal to gobble up 7 million more acres and establish the largest training site in the country. The plan would have bought out or seized acreage from an estimated 17,000 landowners, according to government documents…

State legislators introduced bills aimed at prohibiting the Army from using eminent domain to condemn and seize land around the site. In 2009, a bill to prevent the state from even leasing land in the area split Republicans at the capitol. Stephens, an El Paso Republican, was one of only 17 members of the House to vote against the bill. [Pols emphasis]

Tomasic cites the example of then-GOP gubernatorial candidate Scott McInnis, who also sided back in 2009 with El Paso County military supporters against landowners in southeast Colorado to support the expansion of Pinon Canyon. We took note of McInnis' choice of the Army over private property rights at the time, and McInnis' primary opponents hammered him over the issue with Republican voters. Local voters in turn promised to never support McInnis. And this 2009 vote wasn't the only stand taken by Rep. Stephens against landowners in Pinon Canyon. In 2007, Stephens was one of just a few representatives to vote against House Bill 07-1069, a bill withdrawing the state's consent for Pinon Canyon to expand. That bill was signed into law by Gov. Bill Ritter.

Last November, incumbent Democratic Sen. Mark Udall took action to end concerns over the expansion of the Pinon Canyon Maneuver Site for the long term. From his statement:

Mark Udall, who serves on the U.S. Senate Armed Services Committee, and Assistant Secretary of the Army Katherine Hammack announced today that the U.S. Army will not seek to expand the Pinon Canyon Maneuver Site and will withdraw its request for a land acquisition waiver that had been a longstanding concern for area residents. The Army's decision followed a request by Udall to study the issue and ends years of uncertainty over the possibility that the Army would expand its footprint at the site. The announcement came as Udall, Hammack and southern Colorado leaders met today following months of negotiations.

"This announcement is a win for Southern Colorado ranchers and residents who have long worried that they could be displaced from their land if the Pinon Canyon Maneuver Site were to be expanded. It's also helpful for Fort Carson soldiers who need assured access to the existing maneuver site to prepare for combat. And by proving that we can put aside our differences to resolve controversial issues for the good of all, it's a big win for Colorado," Udall said.

Sen. Udall's actions have by all accounts settled the issue of Pinon Canyon for the foreseeable future, and on the side of landowners who made their cause a focus for property rights supporters across the state. Outside the military bastion of El Paso County, property rights are sacrosanct among conservative Republicans. There is a strong crossover between private property rights activism and conservatism, so much that even ex-Rep. Marilyn Musgrave and her successor Rep. Cory Gardner have fought the Army over Pinon Canyon. That's we we always believed McInnis made a terrible mistake siding with the Army over landowners.

And now, like it or not, it's Amy Stephens' mistake too.