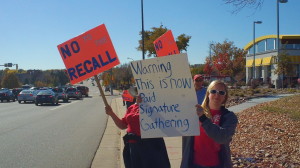 The 2012 elections sounded another new low for the Colorado Republican Party. Angered by the GOP state house majority's extraordinary measures to kill LGBT civil union legislation at the end of the 2012 session, voters threw out the single-seat Republican majority, restoring Democrats to full control of the General Assembly by a healthy margin. The 2010 round of legislative reapportionment is considered by most observers to have gone badly for Republicans as well, with a large number of newly competitive districts ill-suited to the staunch conservative candidates favored by the GOP primary process.

With the exception of the 2010 "Republican wave" election, in which Republicans still fell short of their goals but managed to take the state house by a single seat, the GOP has been losing elections in Colorado since 2004. The reversal of Republican fortunes from their dominance in the late Nineties through 2002 to Democratic dominance at every level of state government since then has been the subject of books like Blueprint by Adam Schrager and Rob Witwer. Safe to say, the past decade has been very, very tough for the morale of Colorado Republicans.

And then last year, an opportunity to strike back presented itself. 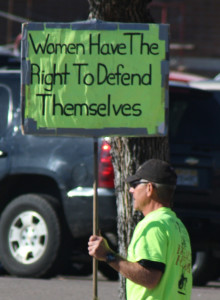 In the wake of mass shootings in 2012 in Aurora, Colorado and in Newtown, Connecticut, support grew among Colorado Democrats to introduce gun safety legislation in the 2013 session. On the morning of the Newtown shooting, Gov. John Hickenlooper was quoted by the Denver Post as having had a change of heart from the aftermath of Aurora in the summer–when he basically said that new gun laws wouldn't help. The news later that day powerfully reinforced Hickenlooper's new view.

As we documented in this space, the campaign to pass gun safety legislation in 2013 turned into the biggest political battle in the Colorado legislature in recent history. Democrats were besieged by pro-gun activists and agitated gun owning members of the public. Crowds of people turned out to testify against the bills, overwhelming hearings, while others drove around the state capitol continuously sounding their horns. Gun owners were in many cases duped by falsehoods about the proposed legislation, being explicitly told by GOP legislators and gun-rights activists that the bills would "ban gun ownership in Colorado." Other alarmist falsehoods, like claims that legislation to limit magazine capacity would "ban all magazines," were pushed by gun activists and uncritically reported by a thoughtless local media.

The result of this misinformed free-for-all was a bitterly angry segment of voters willing to work full time to defeat Democrats responsible for gun safety legislation. As a result of the intense campaign of misinformation by the gun lobby and allied Republicans, a huge gap emerged in public opinion between polled opposition to the vague concept of "gun control," even as they register support–in some cases overwhelming support–for the bills actually passed by the Colorado General Assembly.

After some internal debate among Republicans and the gun lobby, in which party leaders like Chairman Ryan Call refused to get involved, recall petition campaigns began against four Colorado Democratic lawmakers. Two of these petition drives sputtered early. The remaining two recall campaigns against Senate President John Morse and Sen. Angela Giron were successful for different reasons: against Morse, after a large paid signature gathering campaign using professional petitioners. In Giron's case, pre-existing poor relations between Giron, her staff, and her constituents gave local organizers an opening to get her recall on the ballot in a much more legitimately "grassroots" manner.

The recall of Sen. Giron can be attributed to a number of factors that are unique–both to Giron personally, and the often-fractious Democratic majority in Pueblo. But in Morse's case, were it not for another important circumstance that favored Republicans, the halting of the delivery of mail ballots, it is very likely that he would have survived the Senate District 11 recall election.

In Colorado, the constitutional provisions governing recall elections date back to the William Jennings Bryan era. They are entirely unique to recall elections, and as a result conflict with later statutory law, like all-mail ballot elections, intended to make voting easier and more modern in Colorado. Under the Colorado constitution, successor candidates in recalls can petition on to the ballot as close as 15 days before the election. In practice, this makes the delivery of mail ballots impossible. A potential Libertarian candidate in SD-11, backed by an eccentric former Aspen mayoral candidate named Marilyn Marks, successfully sued to stop mail ballots to allow time for said candidate to make the ballot. In the end the Libertarian did not collect enough signatures to do so–but the more important objective of stopping the delivery of mail ballots in the recall elections had been achieved.

While it cannot account for the much bigger margin of defeat for Sen. Angela Giron, Senate President Morse's 300-vote margin of defeat in SD-11 can be fully accounted for by the halting of mail ballots. The importance of this difference cannot be overstated. It's difficult to imagine what Colorado politics would look like had Morse survived his recall, which he very nearly did. Certainly it would be a very different picture.

Buoyed by victory over Morse and Giron, gun-rights activists quickly turned to another Democrat, Sen. Evie Hudak of Arvada, one of the lawmakers earlier targeted last summer whose recall had fizzled out. Paid petition gathering began in earnest. Before the results of the petition gathering campaign against her were released, Sen. Hudak made the decision to resign her seat and allow another Democrat to be appointed to replace her.

Hudak's selfless decision to deny Republicans another chance to pick off an incumbent Democrat in a recall election with the rules stacked against Democrats took the wind out of the sails of the recall movement. Although the Rocky Mountain Gun Owners and their allies promised more recall campaigns, soon afterward they changed their tune and announced they would focus on the upcoming 2014 general election instead.

The "enthusiasm gap" between gun-rights activists and Democrats on this issue, the huge advantage gained in suppressing the delivery of mail ballots, and the built-in strength in a recall election of insurgent passion against incumbency all combined to give Republicans the most effective means of counterattacking majority Democrats they have had since losing power in 2004. But as Colorado GOP chairman Ryan Call has maintained at some risk to his own position, 2013's recall victories may not be much help to Republicans in the upcoming 2014 elections. All of the advantages Republicans had picking off individual legislators in vote-suppressed single district recalls vanish in a general election. There will be mail ballots. There will be a larger electorate than the estimated 11% of voters who decided the SD-11 recall. And as the myths about the gun safety bills passed in 2013 continue to be dispelled, the passion that underpinned the successful recalls of 2013 is steadily ebbing.

With that said, the outcome of the 2014 elections in Colorado is in no way certain. Democrats have tremendous work to do educating the public about their accomplishments, refuting specious allegations of "overreach," and showing how the reality of their work differs from faulty, partisan false impressions. The reality is a body of work that the public supports and wants.

If Democrats can win that message fight, 2013 will go down in history as a brief hiccup in a larger story that hasn't changed in a decade.