Earlier this week we discussed the "Lie of the Year" in Colorado politics, the persistent nonsense that Democrats were out to "take your guns" in 2013. That narrative continued into the September recall elections, the result of which saw two Democratic Senators ousted (though two other recall attempts failed to reach the ballot altogether). Following the Sept. recall results, we saw plenty of lazy analysis blaming Democratic "overreach" in the 2013 legislative session — analysis that had nothing to do with the reality of the situation. 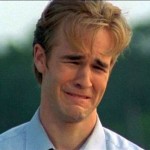 Even Dawson doesn’t cry this much

Republicans were using the term "overreach" long before the recall elections, both during and after the legislative session in an effort to spin what was a successful session for Democrats. Following miserable losses at the polls in 2012, the GOP once again faced a legislative session as the minority party in both chambers, and the only play in their playbook was to be obstructionist. When that failed to work, Republicans turned to saying that Democrats were "overreaching" in doing their job as legislators. What really happened is a perfect example of why Democrats have continued to win elections in Colorado in the last decade: they went to work on the issues they were elected to tackle. Or as Democratic Rep. Dan Pabon told the Denver Post in late April:

Overreaching? No. I think we've been listening to the people of Colorado and they've told us, 'We put you in charge and we want you to get something done.'

This is a lesson that Republicans have not been able to grasp for more than a decade in Colorado, and it is the fundamental reason why they lost control of the legislature back in 2004: Colorado voters want their elected officials to lead and to get things done, and Democrats have figured that out. As we wrote back in May, when the GOP "overreach" spin was in full tilt:

…when you add up the number of constituents that Democrats in the legislature have been elected to represent, you get an average of 1.2 million more constituents than Republicans can claim to represent (note that this number is not 1.2 individual Coloradans, because overlapping Senate and House districts mean that some people will be represented by both parties).

When Senate President John Morse was recalled in September, there was some chatter that Democrats might choose someone other than Senate Majority Leader Morgan Carroll as their next President in order to show voters that they were going to go a more conservative route with their leadership. That chatter was mostly coming from the right, because choosing anyone but Carroll would have been a terrible decision by Democrats — and they knew it. That's why the caucus voted unanimously to select Carroll as Senate President.

Democrats didn't "overreach" in 2013. They passed significant legislation to increase jobs in Colorado, and they passed legislation in increase renewable energy requirements. Yes, they also passed controversial gun safety legislation — but Coloradans largely agreed with those decisions. As a Quinnipiac University poll showed, Democrats lost the messaging battle on gun legislation, but the public actually approved of the specific legislative changes.

While Democrats certainly have some ground to make up on the narrative front in 2014, they have been right to avoid falling into the "overreach" trap set by Republicans that would cause them to pull back from the core leadership and legislative decisions that voters want to see from them. That Democrats didn't overreact when accused of an "overreach" bodes well for their chances at holding their majority through 2014.