More Questions (and Ducking) on New Jeffco School Board

Following up on a story that first appeared here at Colorado Pols (and Jeffco Pols), Zahira Torres of the Denver Post digs into the strange goings-on among the three new members of the Jefferson County School Board:

The Jefferson County school board's new majority may have skirted a law that requires them to conduct business openly by hiring an attorney without a public interview process, according to an open-government expert.

Thomas Kelley, a lawyer for the Colorado Press Association and The Denver Post, said the board's 3-2 decision last week to hire Colorado Springs-based law firm Miller Sparks LLC may have violated the state's open-meetings act, which requires board members to conduct business in public.

"It's not all that common for a board of a public entity to, by itself, conduct interviews, but when they do, at least when it doesn't involve interviews for a personnel position, they have to do those interviews in public," Kelley said.

Led by board president Ken Witt, the majority hired Miller Sparks to represent the school board without seeking proposals for the contract, publicly vetting the candidates or getting cost estimates. Witt and board members Julie Williams and John Newkirk — who were elected in November on a conservative platform — did not return phone calls seeking comment. [Pols emphasis]

New board members Ken Witt, Julie Williams, and John Newkirk continue to thumb their noses at the idea of an open and transparent government. The trio has consistently refused to speak to the media, not returning calls for this story or an editorial that appeared yesterday in the Post. From Post editorial writer Alicia Caldwell: 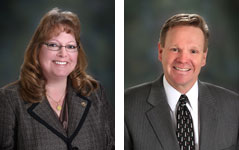 Got a question for Jeffco School Board members Julie Williams or John Newkirk? Keep it to yourself!

It's certainly not an auspicious start. Let's stipulate the new majority, elected with the help of voucher advocate Alex Cranberg and others, came in facing suspicions from certain quarters about their intentions. Would they push for vouchers? Would they focus less on neighborhood schools and more on charters? Was Jeffco about to go the way of Dougco?

I reached out to Witt, the board president, to see if he could ease some minds about the majority's agenda, but did not hear back from him. That leaves us to judge the events at face value.

Unfortunately, these first impressions do little to quell concerns and much to heighten them.

We can only speculate as to the motives of Witt, Williams and Newkirk for refusing to speak to the media, but if they truly believe that what they did was completely kosher, then why not defend themselves publicly? We have a feeling that there is a lot more to this story, particularly involving obvious outside coordination among conservative school board members. As the Loveland Reporter-Herald reported last week, Thompson School District Board President Bob Kerrigan dropped a similar surprise at their board meeting last week:

Kerrigan then revealed that a contract had already been drawn up by a Colorado Springs-based law firm that currently represents Jefferson County schools. Because next week's board meeting will be its last before a three-week hiatus, the seven members are now expected to vote on the matter just six days after learning of it.

While the Denver Post noted the fact that Kerrigan apparently knew about the Jefferson County contract with attorney Brad Miller before it was even brought up at the Jeffco Board meeting, we have yet to see any explanation for this from Kerrigan or the Jeffco Board. Also curious: the Thompson School District contract for Miller's law firm was dated just two days after Kerrigan was elected Board President.

Something doesn't smell right here, and the stink is only going to get worse as board members continue to stay silent.
Tweet
Share