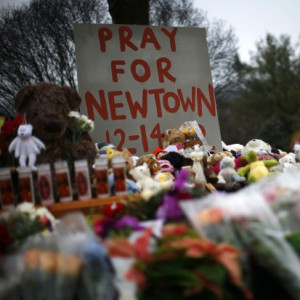 One year ago today, we took note early in the day of a front-page story in The Denver Post about Gov. John Hickenlooper and gun safety legislation. In the immediate aftermath of the summer 2012 mass shooting at a movie theater in Aurora, discussion turned to the possibility of passing gun safety legislation in response. Hickenlooper's answer at the time of the Aurora shootings, if you recall, was probably not:

On the morning of December 14th, 2012, Gov. Hickenlooper was reported to have changed his position. AP:

“I wanted to have at least a couple of months off after the shooting in Aurora to let people process and grieve and get a little space, but it is, I think, now is the time is right,” Hickenlooper said…

“When you look at what happened in Aurora, a great deal of that damage was from the large magazine on the AR-15 (rifle). I think we need to have that discussion and say, ‘Where is this appropriate?’”

A few hours after reading about Hickenlooper's shift in the morning news, every media outlet in America turned to an horrific shooting underway at an elementary school in Newtown, Connecticut.

It's not necessary in this post to recount the whole year-long story of what came after that day. Our readers know well how the Colorado legislative session began in January with high hopes among Democrats for gun safety legislation. The most important legislation sought by Democrats, instituting universal background checks for most transfers of guns, is now law. Colorado also limited magazine capacity to 15 rounds, passed a nominal fee to help cover the cost of background checks, did away with all-online concealed carry permit courses, and passed a bill to keep guns from people who commit domestic violence. Several other bills that were always intended to be "flanking" measures died along the way.

And then Colorado politics, as you know, went completely insane. We are still more or less in that state today.

But one year ago today, as these two stories became the same story, it was easy to understand why Hickenlooper's change of heart on gun safety was called for.