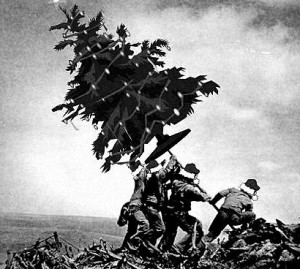 Striking a blow for paganism.

Talking Points Memo (the real one):

As evidence, O'Reilly displayed a flyer for Macy's "Santa Land" that touts it will help customers with their "holiday wish list."

"So here's my question to Macy's: what holiday is Santa celebrating?" he asked. "The Winter Solstice? The birthday of a reindeer? What?"

A "War on Christmas" is perennially alleged to be underway by Christian conservatives, who blame "atheist activists" for various perceived infringements on the right to publicly observe an essentially religious holiday. In Texas this year, state legislators passed a "Merry Christmas Bill," affirming the right of public school students and teachers to "offer traditional greetings."

The truth is, of course, that Christmas has lost its sanctity to decades of commercialization far more than to any anti-religious political agenda. Aggrieved Christians also sometimes overvalue their right to free religious expression against the rights of others to not observe any religion. Businesses enforce holiday-neutral expressions for practical reasons. Public spaces and organizations have an obligation to be respectful of everyone. In the end, the "War on Christmas" seems to exist mostly in the minds of those who promote the idea that such a thing exists at all. We submit that for most Americans, it just isn't a big deal either way.

With that said, we've already been told to watch for a Colorado "Merry Christmas Bill" next session.