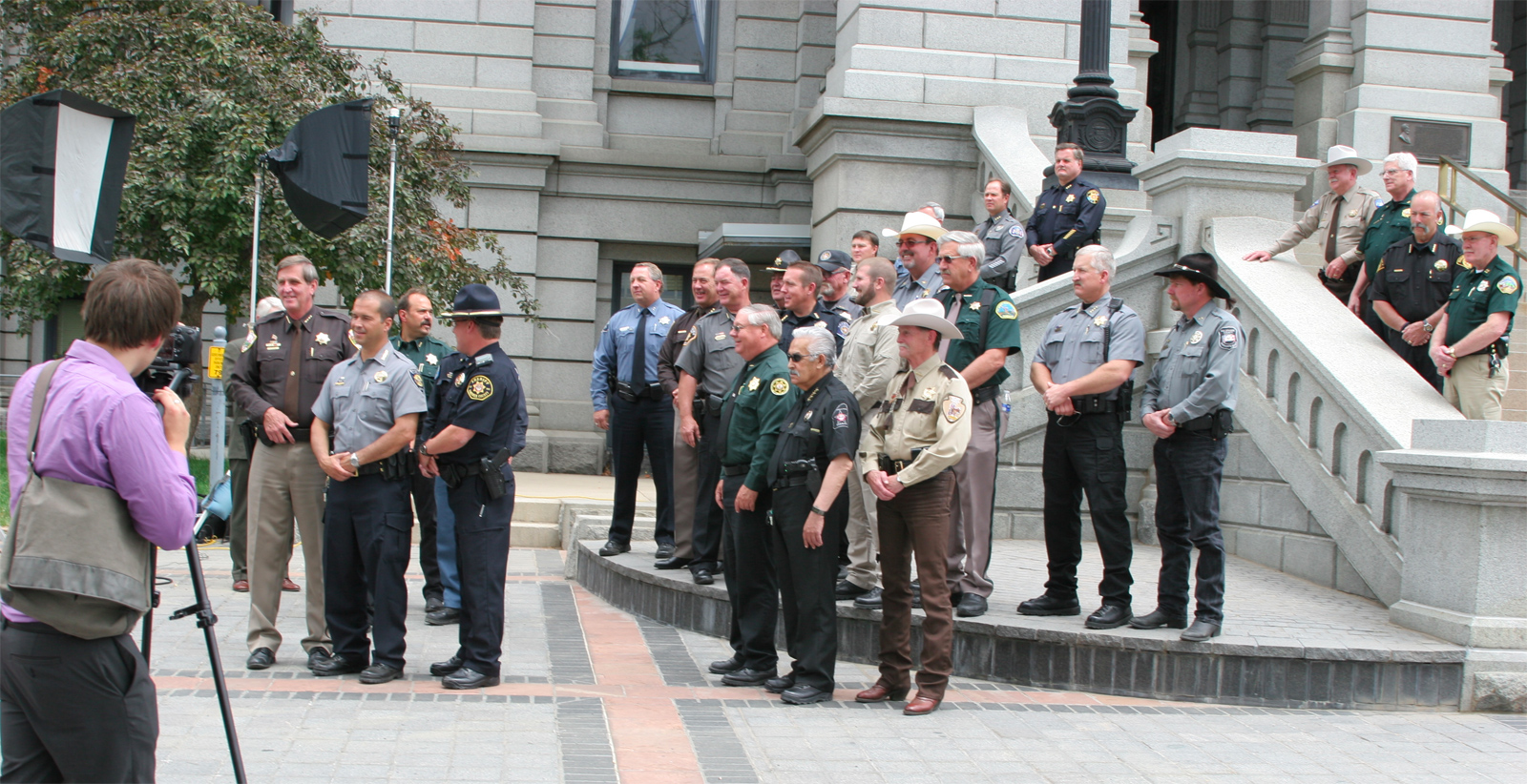 An important development last Wednesday in the ongoing legal action by the gun lobby against gun safety legislation passed in Colorado this year, as reported by the Associated Press' Ivan Moreno. Don't let this slip down the Thanksgiving weekend memory hole:

Sheriffs in most of Colorado’s 64 counties filed the lawsuit in May, saying the new regulations violate the Second Amendment. The sheriffs are elected and represent rural, gun-friendly parts of the state.

In her ruling, Krieger said sheriffs still can choose to join the lawsuit in an individual capacity, and they’ll have 14 days to make that decision. But they cannot, as a group, sue the state in their official capacities.

We'll be the first to admit that rounding up a majority of Colorado county sheriffs–generally conservative elected officials who have been boosted for years by pro-gun groups like the Rocky Mountain Gun Owners–to publicly front the opposition to these new gun safety bills was a brilliant public relations move. In Colorado, the huge difference between elected conservative county sheriffs who opposed the new laws for political reasons and appointed police chiefs who generally supported them for practical reasons was lost on the public. Furthermore, some of these county sheriffs, like Weld County Sheriff John Cooke, are in fact distantly on the fringe of the gun safety debate, standing in opposition to all background checks for gun purchases. It's always been our opinion that if the voting public understood the positions held by many of these elected sheriffs, those badges wouldn't count for nearly as much.

And as the Denver Post's Ryan Parker reported on this same ruling, another major component of the fear-based messaging against this year's gun safety bills has been invalidated–again.

Krieger dismissed the claim that the state legal language dealing with readily converted gun magazines — those with removable base plates, allowing for additional rounds to be added via an extender — is "unconstitutionally vague."

Krieger said that Technical Guidance letters issued by the state Attorney General's Office after the magazine-limit law passed, outlining the interpretation of the "designed to be readily converted" component of the mag-ban measure, sufficiently addressed that issue.

In the finding, Krieger wrote that magazines with removable base plates — which most possess — "are not considered to be 'designed to be readily converted' into large-capacity magazines for purposes of enforcement of the statute."

The claim that the language in the magazine limit's provisions regarding the "convertibility" of magazines to higher capacities could "ban all magazines" was heavily promoted by conservatives during and after the gun safety debate this year. Lawmakers and conservative pundits like Jon Caldara warned in the most alarmist terms they could find of these "far-reaching consequences," either unintended or part of a deliberate conspiracy to "ban all guns," that would result from the passage of House Bill 1224.

It's important to understand that a very large part of the backlash from gun owners to passage of these laws is based directly on this misinformation. The media did nothing to refute these claims, even after GOP Attorney General John Suthers issued his technical guidance on the new law that entirely disproved them. Reporters like Ryan Parker of the Post and Kyle Clark of 9NEWS subsidized these unfounded rumors rather than honestly looking at them. Proponents, for their part, insist the hysteria over the magazine limit's "unintended consequences" was always hogwash, and that Colorado is hardly the first state to limit magazine capacity. The language of House Bill 1224 is consistent with that of other states, and the federal 1994 assault weapons ban that withstood a decade of court challenges.

Democrats need to realize that this misinformation, which they scoffed at among themselves but totally failed to publicly respond to this year, has done enormous political damage. During the legislative debate and especially during the recalls this summer of two Democratic Colorado senators, a strategic decision was made to avoid direct confrontation on the gun safety bills. Given the outright lies being spread about these bills, and the media's failure to accurately report on them, that decision was nothing short of catastrophic.

It isn't just a lecture in hindsight, folks. Beginning in January, Colorado Republicans intend to make Democrats talk about guns every day, and Democrats must be ready. Republicans believe they have found the Achilles' heel of adversaries who have been trouncing them at the polls for a decade in this state. As is often said in politics today, being right is not enough. Democrats will either win this message battle or die by it in 2014.