UPDATE: Not to be outdone, the conservative Washington Examiner obligingly offers a forum for Secretary of State Scott Gessler to slam opponent Tom Tancredo: 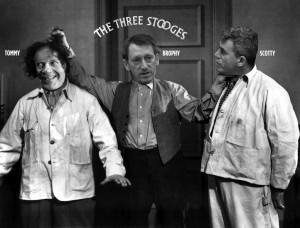 State Sen. Greg Brophy, R-Wray, is trying to cut a path through the Republicans running for governor by stressing his years in the Legislature, working on issues from energy development to education reform.

“And they can’t get elected statewide, while I can,” Brophy told The Pueblo Chieftain editorial board Friday.

Sen. Greg Brophy has underperformed in fundraising compared to his GOP primary opponents, and if we had to place money today, he would not be our pick to win the nomination. It's interesting therefore to see Brophy tearing into the presumptive frontrunner in this race, Secretary of State Scott Gessler, or GOP base-emotive favorite Tom Tancredo. Brophy certainly has had his share of embarrassing incidents and ugly right-wing policy prescriptions, and the issues he just dismissed as "fringe" have a devoted following among the GOP primary electorate.

Whatever Brophy's plans, it looks like the GOP primary is going to get nasty on the quick.