Neguse Off To Strong Start in SoS Race 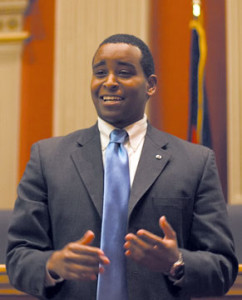 A press release today from the campaign of Democratic CU Regent Joe Neguse, running for Secretary of State against GOP El Paso County Clerk Wayne Williams, shows good performance out of the gate with over $100,000 raised in the last 6 days of Q2 and his first whole quarter of fundraising:

Joe Neguse filed his official paperwork on June 24, 2013 making him a candidate for Secretary of State of Colorado.  With less than seven days to fundraise for the second financial quarter that ended June 30th, the campaign raised $28,484.37 from 228 unique contributors (which surpassed any other previous candidates for Secretary of State in both total contributions and total number of contributors in their inaugural financial quarters).  Today, the campaign is proud to announce that Neguse has broken a new fundraising goal, having raised $73,926.95 in its first full quarter, bringing the total to over $100,000 in less than 100 days.

“On the heels of an impressive campaign roll out, these unprecedented fundraising numbers are further proof that voters are eager to support Neguse’s candidacy,” said Senior Strategist Craig Hughes.

Watch for this race to garner more attention in the coming months. Sources confirm to us today that GOP Jefferson County Clerk Pam Anderson will not be running for Secretary of State. The popular and moderate Anderson–one of the prime architects of this year's election modernization law, House Bill 1303–would have made for a much tougher race for Neguse. Now, against the avowedly partisan Williams as the likely Republican nominee, Neguse looks very strong–and the stakes are higher for Democrats to ensure Williams doesn't get the job.