RMGO: How To Not Win Friends Or Influence Anybody 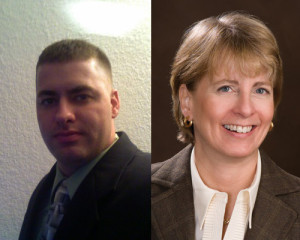 CBS4 follows up the story of the lobbyist for the Rocky Mountain Gun Owners, Joe Neville, and his confrontation this year with GOP Rep. Cheri Gerou during the debate over gun safety legislation in the Colorado General Assembly. It's important to keep in mind that Rep. Gerou never had any intentions of supporting those bills, and therefore could be characterized as a "friendly" target of RMGO's lobbying efforts. Nonetheless:

Joseph Neville claims his rights were violated as a result of a confrontation with a state representative.

The incident happened during the last session. The lawsuit was filed by Neville, a lobbyist for the Rocky Mountain Gun Owners Association. It was filed in federal court in which Neville claims he was ordered out of the Capitol at the request of Rep. Cheri Gerou.

Neville claims he could lose his ability to perform his job.

Joe Neville's job, at least his main job, is to lobby on behalf of RMGO's position on gun bills. The conflict between Neville and Rep. Gerou reportedly arose after Neville spread rumors that Gerou might not stay with the Republican caucus on one or more of the bills, leading to a round of the grassroots gun lobby's special brand of "encouragement" against her. Gerou went to Neville to demand he stop "spreading misinformation," which led to a heated exchange, with Gerou telling Neville to "fuck off," and Neville promising "another round of mailers" in Gerou's district. At that, Rep. Gerou directed security to escort Joseph Neville from the Capitol.

As we reported in August, this kerfluffle didn't happen in a vacuum. Joe Neville's father, former Colorado Sen. Tim Neville, has announced his intentions to run for Sen. Jeanne Nicholson's SD-16 seat next year. A Republican candidate has already announced his campaign for Gerou's House seat, leading to speculation that Rep. Gerou will challenge Neville in a primary for the GOP SD-16 nomination.

Which, obviously, would be a reason for the younger Neville to threaten "a round of mailers" against Gerou.

With all of that in mind, there is the original question: it's against Assembly rules for a lobbyist to threaten a legislator in any way, and that includes "political reprisal." Based on that, did Rep. Gerou have the right to eighty-six Neville?

With no partisan undertones, we can say this time we truly hope so.