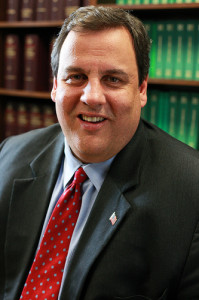 The red-on-red hits just keep coming in the wake of Colorado GOP representatives' request for disaster relief monies for last month's floods in Colorado, after having voted against those same funds in January as attached to the Hurricane Sandy relief bill. As the Washington Post's Reid Wilson reports:

“They’re hypocrites. That’s what they are,” Christie said of the Colorado Republicans during a telephone town hall meeting Thursday night, in comments first reported by the Newark Star-Ledger. But, he added: “We can’t be vindictive. Because we have to be concerned about the actual people that are being hurt.”

As reported this week by New Jersey media outlets, the money sought by the Colorado delegation originally came from the Sandy relief legislation that Colorado Republicans voted against last January. As the Denver Post's Allison Sherry reports today, Rep. Cory Gardner is standing by his original explanation that he voted against the Sandy relief bill as retaliation for the stripping of funds for Colorado from the bill–while Rep. Mike Coffman and Doug Lamborn say they voted against on simpler ideological grounds.

Rep. Doug Lamborn, R-Colorado Springs, said the final Sandy bill was "overly generous," and that's why he voted against it.

As Wilson at the Washington Post reports, New Jersey Sen. Jeff Chiesa, recently appointed by Christie, put a hold on Colorado's request until transportation officials assured him that they could get the money to fund some $400 million for road repairs in Colorado from a source other than the Hurricane Sandy legislation that Colorado Republicans voted against. That hold has been lifted, says Wilson, but Sherry reports a final reconciliation of House and Senate versions is on hold until the shutdown impasse is resolved.

We've said it several times now: this is a horrifying embarrassment, not just for these four persona non grata Republican representatives, but for the whole state–an example of blatant hypocrisy and selfishness now linked to "the state of Colorado" more than any individual politician. Obviously there is a partisan distinction that can be made, but is that really enough for the people of Colorado from both parties who would never have approved of this hypocrisy? What can Colorado Republicans with any sense of community say? Or, dare we say it…Colorado Republican flood victims?

Folks, this matters. It matters to all of us. And it isn't about partisanship. It's about being better neighbors and citizens than this. We know the last thing we can expect from the Colorado Republican congressional delegation is an apology to the victims of Hurricane Sandy, including their fellow Republicans who are rightly criticizing them. But on a level that transcends politics, we really wish they would.