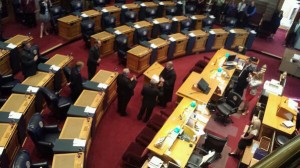 Newly elected state Sens. Bernie Herpin and George Rivera were sworn in Thursday after winning the seats of two ousted Democrats, bringing the GOP within a one-vote margin of power…

"We are witnessing today the peaceful transfer of responsibility from one elected official to another, a freedom that many people in other nations have never known," Herpin said. "I realize I have much to learn, but I pledge to work hard, serve with honor and never forget the lessons of this summer that this is truly a republic of the people, by the people, for the people and we serve at the pleasure of those who represent us."

I leave the legislature with no regrets.

A neighborhood in my district bears the troubling distinction of having the most gun deaths in the entire state.  As a Senator, I served families who expect, at a minimum, we will prevent criminals from getting guns.

Bernie Herpin was used as a pawn in an election where almost 80 percent of voters did not even participate and only 11 percent of the district elected him. Make no mistake about it — he was elected in a myopic recall where he ran on only one issue. Senate District 11 has dynamic needs and is not defined by one issue.

Pueblo is my home and, for now, I will return to my roots as a citizen advocate fighting for Southern Colorado families, schools and businesses.  Now, more than ever, Americans are demanding bold leadership of our elected officials and I'm very proud of the breadth of work I accomplished in just three years of service in the Senate.

I'm leaving, not on my own terms, but with my integrity intact and with the sure and certain knowledge that Colorado and Pueblo are safer with these modest gun safety laws.

Both Sens. Bernie Herpin and George Rivera face a difficult battle to keep their seats in 2014. In Senate District 11 in Colorado Springs, 2010's very close win for Morse isn't a predictor of future results, as reapportionment made the district blue enough that it should be entirely retakable for Democrats. As for Rivera's Senate District 3, well, he's the first Republican to represent Pueblo in many decades–and he's virtually certain to serve one year and lose unceremoniously in 2014. We've explained since the historic recall elections last month the many reasons why what happened in these two Senate districts cannot be replicated in any general election. Short of a new era of continuous recalls in favorable districts, which we think the voting public would very quickly tire of, this was most likely the high-water mark of the GOP's "comeback," produced by a combination of unique circumstances.

With that said, as of this morning, Herpin and Rivera are your newest Colorado Senators. Welcome aboard.