UPDATE #2: For what it's worth, here is Rep. Cory Gardner's tit-for-tat response:

Gardner spokesman Alex Siciliano said the Republican congressman voted against the Sandy relief bill in January because it didn’t include money to help his state recover from major wildfires last year.

“The rejection … said that Colorado fire victims weren’t as important as hurricane victims and that is why he voted against the additional funding,” Siciliano said. “If Congressman Pascrell wishes to complain, perhaps he should take the time to understand our concern that Colorado victims were ignored.”

We're not sure if it's been explained to Gardner's staff that the money he voted against in January is the same flood relief money Gardner was crowing about last week. We'd like to see that addressed, understanding that there's probably no good answer.

UPDATE: Members of Congress from New Jersey join in the slamming of the Colorado Republican "Hypocrisy Caucus," adding a damning twist–the money Colorado Republicans sought for relief after the flooding was actually part of the Sandy relief bill they voted against in January. As MaryAnn Spoto of the Star-Ledger reports:

Two New Jersey congressmen are calling a group of Colorado Republicans hypocrites for voting against the $50 billion Hurricane Sandy relief package earlier this year then requesting a chunk of the money to help their own state recover from last month’s deadly floods.

U.S. Rep. Bill Pascrell Jr. (D-9th Dist.) said that to get the Sandy aid package approved in January — after more than two months of delays — lawmakers from the states affected by the hurricane had to agree to a provision that would allow some of the money to go to other states hit by disasters…

“Now, some of these very congressmen are shamelessly proving just how hypocritical they are by using the same Sandy funding they voted against to help their constituents,” he said. [Pols emphasis]

“And, in you can’t-make-this-up irony, this legislation to help Colorado wouldn’t be possible without the Sandy aid bill. [Pols emphasis] It was just approved by voice vote in the House because Northeast lawmakers did not stand in opposition, said Jason Galanes, a spokesman for LoBiondo. “We understand the true nature of disasters and the critical need for emergency assistance.”

Objectively speaking, we truly don't see how this could look any worse for our local Republicans. 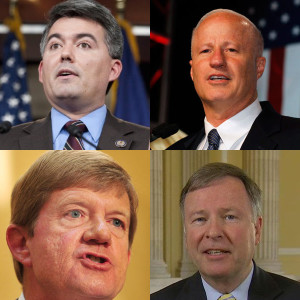 A story in today's New York Daily News is calculated to enrage their local readers, still recovering from last year's devastating Hurricane Sandy. It pertains to the lifting last week of a $100 million (mistakenly reported as $100 billion in this story) cap on emergency federal highway relief for Colorado after the recent devastating floods here. That stands out in ugly contrast to the vote by Colorado Republicans following Hurricane Sandy against relief legislation, which Rep. Cory Gardner claimed was in retaliation for Colorado being "treated differently" than other states. The original Sandy aid legislation, in full fairness, also contained money for flooding mitigation in Colorado, which was stripped from the bill by fellow Republicans. That's the excuse Gardner makes today.

But as the Daily News' Dan Friedman reports, nobody in New York wants to hear it.

New York lawmakers who had to wage a bitter fight for the Sandy money found the flip-flop by their Colorado counterparts too tough to take.

“When Hurricane Sandy struck New York, Reps. Gardner, Coffman, Lamborn and Tipton opposed providing federal assistance to help us rebuild. But their opposition to federal emergency aid dissolved when their state was struck by historic floods.”

He added, “It’s the height of hypocrisy for them to have so quickly and conveniently changed their position. I only wish the best for the people of Colorado as they repair their lives after such devastation, but I hope New Yorkers make clear these members are persona non grata in our town.” [Pols emphasis]

Rep. Pete King (R-L.I.), who called out fellow Republicans when they opposed the Sandy aid, said the Colorado lawmakers showed “real hypocrisy” in voting for the flood relief this week.

“You never know when and where these disasters are gonna hit,” King said. “They should just thank God, we didn’t use the same tactics against them that they used against us.” [Pols emphasis]

King said one of the Colorado Republicans, who he declined to name, asked him before the vote if he was still angry over the Sandy vote.

A little over a week ago, we wrote our open letter to the rest of America anticipating this exact criticism–so it's safe to say we're not surprised to see this. As we said then, the vote by local Republicans against Hurricane Sandy relief was roundly criticized, and it should not be considered representative of the population of this state–especially those now in need of relief themselves. This embarrassment aside, we do care about our neighbors.

As for these four "persona non grata" Republicans from Colorado? As they say back east, "screw 'em."