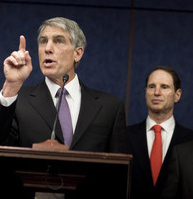 A proposal unveiled Wednesday by Colorado Democrat Mark Udall and three other senators would end sweeping surveillance operations like the ones revealed by former National Security Agency contractor Edward Snowden.

Under legislation being pushed by Udall, Democrats Ron Wyden of Oregon and Richard Blumenthal of Connecticut, and Republican Rand Paul of Kentucky, the government could only access telephone and Internet records of those suspected of terrorism or espionage. 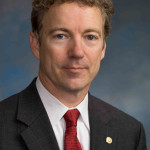 “There is growing, bipartisan sentiment in Colorado and across the country that the way the NSA and our intelligence agencies are balancing Americans’ privacy rights and our security is fundamentally out of whack. We need to end the NSA's collection of millions of innocent Americans' private phone records and focus on the real problem: terrorists and spies," Udall said. "These aren't vague or abstract threats to our liberty. These dragnet searches are happening right now. I am proud to lead this bipartisan push to protect Americans' privacy rights and ensure that our pursuit of security does not trample our constitutional liberties."

"The overbroad surveillance activities that have come to light over the last few months have shown how wide the gap between upholding the constitutional liberties of American citizens and protecting national security has become," [Sen. Ron] Wyden said. "The effect can be felt not only by the significant erosion of civil liberties domestically, but in the reduced credibility of the American government abroad and the significant impact on American economic interests. These reforms seek to close that gap and avoid the false choice of protecting security over the preservation of personal liberty."

"Reforming the Foreign Intelligence Surveillance Act must restrict the executive's expansive powers to seize private records in secret and without probable cause," [Sen. Rand] Paul said. "I support reforms on the way to a full restoration of our Founders' idea embodied in the Fourth Amendment."

The controversy this year over continued large-scale domestic surveillance by the National Security Agency, which began under Republican President George W. Bush but has continued and even been expanded by President Barack Obama, has proven a morale boat-anchor for the Democratic base. Sen. Udall's early and vocal criticism on this issue, now validated in the wake of the Edward Snowden leaks, should insulate him from the base's anger over domestic surveillance being continued by a President that was at one point trusted to reform these abuses. It's anybody's guess whether President Obama will support this legislation–we would recommend that–but even if Obama doesn't, Udall is doing the right thing ethically and politically by taking on this fight.