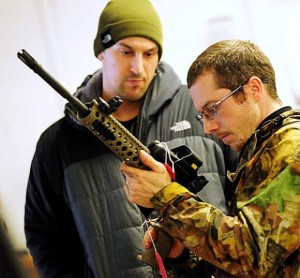 Another dismayingly slanted story on guns from the Denver Post's Ryan Parker, this time about the results of House Bill 1229, the legislation passed this year requiring background checks be performed on most sales of guns in Colorado:

In the first month of expanded background checks for gun purchases, 561 people who sold guns in private transactions complied with the new law. Ten denials were issued.

And although the numbers represent only the first month's worth of data, the total figure of private checks is far below the percentage of sales that Democrats had claimed were going unchecked…

"It is a good indicator of how micromanaging everyone's life has such small returns," said state Sen. Kevin Lundberg, R-Berthoud. "Those 10 denials, if they are even accurate, are not persuasive at all."

As we've noted repeatedly with Parker's substandard reporting on the gun bills passed this year, a huge part of the story is being left out. The biggest problem with reporting these one-month numbers, 561 checks and 10 denials, as "far below what Democrats had claimed were going unchecked" is the simple deterrent effect of having a law requiring background checks in place. Opponents of House Bill 1229 argued that criminals wouldn't submit to background checks they know they'll lose. What these numbers mean is that 561 guns were confirmed to be sold to legal buyers, not to criminals. That's 561 guns that might otherwise have been sold, if not knowingly to criminals, then at least without the buyer's peace of mind knowing they didn't sell a gun to someone who shouldn't have one.

As for the ten attempted gun purchases that were denied? Arguing against that reminds us of Rep. Mark Waller's defense of House Bill 12-1048, which would have eliminated "redundant" state background checks. Colorado passed the CBI background check law after a man named Simon Gonzales bought a gun after a federal check missed the local restraining order. Gonzales proceeded to kill his entire Castle Rock family. Waller argued dismissively for HB12-1048, saying "that one act is the reason that we have this statute on the books."

It just seems wrong to tell a victim of even one shooting a law that might have stopped it is "not persuasive."