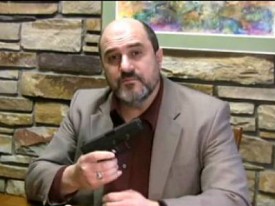 On Tuesday, we took note of a new website from the right-wing Independence Institute that appears to give instructions on how to vote in the upcoming recall special elections in Colorado Springs and Pueblo, even if you don't live there. The severely flawed premise of the site is a fictitious "unintended consequence" of this year's Colorado House Bill 1303, the Voter Access and Modernized Elections Act, which some Republicans have claimed might allow voters from outside the two senate districts in question to participate. As even Secretary of State Scott Gessler's office has confirmed, that's false: a voter must have already moved to the district to claim their "intention" to reside there, and any false statement in the process of registering to vote is a crime. To actually vote under those false pretenses is felony voter fraud.

But nonetheless, as a press release from the Independence Institute announces today:

The Independence Institute president will exercise his legal voting rights in next week's recall election, casting a ballot in a district outside his current residence.

Independence Institute president Jon Caldara's decision to vote in the Senate District 11 recall kicks off the "Bring in the Vote" educational campaign, highlighting the significant legal changes in Colorado's "Voter Access and Modernized Elections Act," signed into law by Gov. John Hickenlooper on May 10.

Calling attention to the lax new election law sponsored by Senators John Morse and Angela Giron, both facing recall elections, Caldara announced that he has the "intention" to make his permanent home in Senate District 11, currently represented by Morse.

Under HB 1303, the "intention" to establish residence along with a few minor requirements such as being 18 years of age, living in Colorado for 22 days, and having an address in the district, permits almost anyone to "Bring in the Vote" and cast a ballot in any district.

"It is my belief that this extremely sloppy new election law was designed to legally move voters into districts where their vote is most useful. I will show how this dangerous new law works by easily and legally voting in the John Morse recall election," explained Caldara.

"John Morse sponsored this law and worked its passage through the Senate. And now, sadly, under this law future Colorado elections will be decided by which candidate has the most buses." [Pols emphasis]

Now folks, we don't know where Caldara is getting his legal advice, but we surer than hell wouldn't try this based on every sane interpretation of House Bill 1303 we've heard. Certainly if the legal question hinges on "intent," Caldara's "intent" is to mess with the system–and quite possibly to encourage fellow Republicans to do the same. That and to draw attention to himself, naturally. Either way, we are very confident that no one on the Democratic side of these recalls has any plans to bus people in to so-called "gypsy vote," because they all think this half-baked theory is completely wrong.