What to vote in the recall election, but dont currently reside in the district? Go to http://t.co/XfbhKUgIIx to learn your rights #coleg 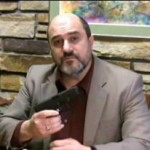 ​Clicking through on that eyebrow-raising Tweet from Jon Caldara takes you to a new website, Bring In The Vote, which advertises itself as "a project of the Independence Institute." Here's what it says:

Something really cool in the new law, you can even wait until the election day to decide if you have time to register and cast your ballot. No more having to register 30 days before the election and no more being required to live that entire time in the district where you choose to vote. In fact, you just have to have an address in the district. Honestly, they’d like you to live there, but no one can force you. [Pols emphasis] The law allows you to move from one Colorado district to another up until the day before the election if you have the “intention” of making the new district your home. Although they may call you a name such as “gypsy voter.”

The website is tongue-in-cheek in an inane sort of way, but there's nothing to clearly disclaim to readers anywhere that no, you cannot actually vote in these recall election if you don't reside in the districts. The truth is that any misrepresentation of one's residence to vote in a district one does not live in is a felony–to include misrepresenting one's "intentions" to reside there. When Caldara says "they'd like you to live there, but no one can force you," that's simply not true. As GOP Secretary of State Scott Gessler's own office verified, a voter must have already moved to the district in order to claim their "intention" to live there. Any false affirmation entering into this chain of events is a felony under Colorado law.

Reading these sophomorically worded "instructions," it's undeniable that a casual reading of this website could give voters the idea that they can successfully "gypsy vote" in these recall elections. There's only one instance on the entire website we can find of even the barest legal disclaimer:

This summary is provided for information purposed only and not for the purposes of offering legal advice or a legal opinion on any matter. No reader should act or refrain from acting on the basis of any statement of the Independence Institute in this summary without seeking advice from qualified legal counsel on the particular facts and circumstances involved. [Pols emphasis]

Translation: "Please don't actually do this!" But you don't see this disclaimer until you get to the bottom of one page on the site, and not the same page as the claim "no one can force you" to live in the district.

The fact is, this site is so poorly constructed and worded that most users won't get what the point is at all. But other than to encourage vote fraud, we don't have any idea why this would considered a good idea. And if the hope was actually to produce real, if perhaps unsuspecting "gypsy voters?" We don't have the words to articulate just how stupid that would be.