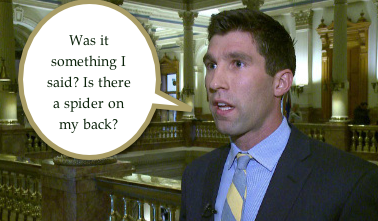 UPDATE: According to the Denver daily paper, Ken Buck has filed paperwork with the FEC to run for Senate in 2014, making Owen Hill debatably, by a slim margin, the second-least laughable of the 2014 Republican US Senate primary candidates. I'm quite sure that the lessons Buck learned from losing his last Senate race have prepared him to lose this one much better.

Only? Could it be that Udall recoiled after detecting a case of Hill-itosis? Did Udall have a bad experience with pastel striped ties during his boyhood? Let's dive a bit deeper and see what's so frightening to the well-funded and popular incumbent, shall we? In Hill's words:

I just received some very important inside information I must share it with you first.

After 17 years as a career politician… U.S. Senator Mark Udall is scared for his political future.

Those aren't my words. Those words come from someone deep inside Mark Udall's operation, and he isn't just scared of anyone. According to insiders familiar with this race, there is only one announced or even potential Republican candidate Democrat Mark Udall doesn't want to run against… and that is me.

(The glaring proofreading error in the first sentence is Hill's, not mine, and was included in the final-draft email.)

I can't be too hard on the rookie state senator for his ridiculous fundraising pitch. After all, down on their luck Dilbert characters need work, too…

Read on for the full email and a Pointy Haired Boss worthy use of the word "innovating."

Full text of Hill's silly fundraising pitch — only the link to donate has been removed. You can find it, if you feel moved to give to Hill's Home for Unwanted Hyperbolic Copywriters:

I just received some very important inside information I must share it with you first.

After 17 years as a career politician… U.S. Senator Mark Udall is scared for his political future.

Those aren't my words. Those words come from someone deep inside Mark Udall's operation, and he isn't just scared of anyone. According to insiders familiar with this race, there is only one announced or even potential Republican candidate Democrat Mark Udall doesn't want to run against… and that is me.

Moreover, Mark Udall's political ally and fellow Colorado Senator, Mike Bennett head of the hyper-partisan Democrat Senatorial Campaign Committee (DSCC), is already spending thousands of dollars digging into my conservative record. In fact, I'm the only Colorado candidate for U.S. Senate that Bennett is looking into.

And it's no wonder. Of course a career politician with a record of bankrupting our country with wasteful boondoggles like Solyndra and empty "stimulus" give-a-ways would be wary of defending his abysmal record against an independent conservative like me.

You see, I don't fit the political mold that Udall and national Democrats are used to running against.

I'm part of a new generation of conservative leadership responsible for innovating better ways to reach swing voters. I have dedicated my entire career to helping others, through non-profits, fighting to protect citizens as a military veteran, and now, as a State Senator. My goal is to stand up and speak for those without a voice. My faith in a loving God and devotion to my wife Emily and our four children spur me to lead the charge in fixing our broken government.

The only thing standing in the way of defeating the Democrats and Mark Udall is his massive multi-million dollar war chest.

And that's where you come in. While we don't need to match Udall dollar for dollar, this campaign can't succeed without your immediate help.

Will you support my campaign with an important contribution today? Chip in a donation of $20, $50, $100, or what you can afford right away please.

Udall's afraid and should be. He knows the era of big tax and spend government is coming to a close. But rather than grumble about Udall, join me to bring new leadership to advance our conservative values.

P.S. There's a reason Udall doesn't want to run against me. He can't defend his wasteful record and he knows my leadership can restore the Republican Party in Colorado. In addition, on a tele-townhall last week Udall admitted to supporters that Republicans have a "5-6 point advantage" in the 2014 midterm elections. Your support is crucial to showing Udall he is right to be afraid. Please, make a donation of $20, $50 or $100 right now.

Well. Okay. I suppose making shit up and attributing it to unnamed inside sources is perhaps a "better way to reach swing voters," but I think you're supposed to earn their support, not just "reach" them, if you want to win.

However, Senator Hill, you may have a bright future in political comedy, should you fall short in your current aspirations. Have you considered an internship on Colbert?