UPDATE: I almost ended this post with the line, "How dumb do you think Latinos are?" but I'm glad I didn't, because it turns out that question has a sad, sad answer. According to the author of Heritage's controversial report, the report they are still pushing, the answer is "0.72 standard deviations, suggesting a Hispanic-American IQ of 89.2." Jason Richwine later resigned from The Heritage Foundation after his enormously racist dissertation went viral.

Rather than withdrawing the report authored by a now-notorious racist, Heritage simply swept it under the rug for a couple of months and then put it back on their blog this week. Yep. This story is literally that ridiculous. The group trying to teach the GOP how to reach Latino voters employed, and still supports the work of, someone who thinks those Latino voters are a danger to the country because they're just so darn genetically stupid.

Oh, isn't that nice? A free event teaching conservatives "how to message to Hispanic voters more effectively." Sounds like something the GOP desperately needs. Let's take a peep at what's on the menu…

Well, that can't be all bad, can it? Republicans must have noticed that they didn't do too well last year with Latino voters, and now they're trying to bring Latinos into the fold. Perhaps the sponsors are among the many Republicans who support comprehensive immigration reform. Could it be they'll discuss the economic benefits of immigration? Highlight Latino-owned businesses? Praise the strong family values and faith-based traditions common in Latino families? 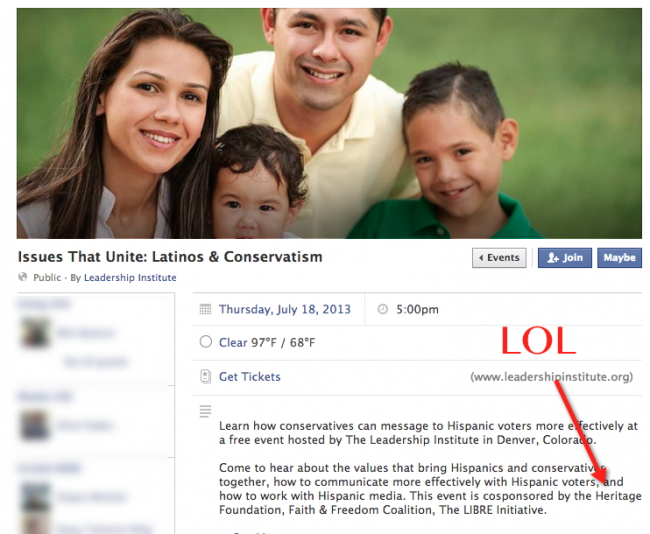 You know, the group so extreme (and so willing to push obviously falsified statistics) on immigration reform that that the freaking Cato Institute devoted an entire blog post to ripping them a new one?

Americans for Tax Reform, Senator John McCain, and expected GOP presidential candidate Marco Rubio were also among conservative groups rejecting The Heritage Foundation. And it's not like this is old news, either. This all happened in April. And three months later, Heritage has suddenly become the first named sponsor of an event teaching conservatives how to message Latino voters?

Hey, Heritage: If you can't even message your talking points successfully to the most prominent Latino in the Republican Party, you may not be ready to teach a course on reaching "Hispanic" voters.