Then There Were Two, Sort Of: Owen Hill Files To Challenge Udall 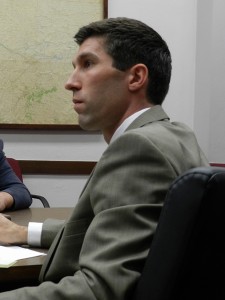 Sen. Owen Hill, after just one year as a state lawmaker, is running for the U.S. Senate, FOX31 Denver is first to report.

Hill, R-Colorado Springs, will announce Monday that he is seeking the GOP’s nomination to challenge Democratic Sen. Mark Udall next year…

“We’ve been looking at it for a while,” Hill told FOX31 Denver Monday morning. “The Republican Party in Colorado does not have an answer for what the Democrats are doing. It’s time for some new ideas and for a candidate who will focus on innovation. both on policy and within our politics.

“There’s no one on our side who’s bringing that message of innovation and a focus on the freedom of the individual.”

Certainly freshman Sen. Owen Hill, 31, is a more formidable contender than Randy Baumgardner, the fellow state senator who is announcing his own bid this week for the GOP nomination to run against incumbent U.S. Senator Mark Udall in 2014. But that's principally because Baumgardner is, to put it charitably, laughably unqualified. In Hill's exceedingly short span as a state lawmaker, he has established a reputation as a circumlocutory and reasonably eloquent orator. To be clear, we're using the word "circumlocutory" because we know Sen. Hill knows what it means–even if none of you all do.

We can't call Sen. Hill an appreciably more competitive candidate for this office than some of the other names that remain out there, but a run for U.S. Senate in 2014 might make sense for Hill personally. For one thing, it's a safe race to run–he doesn't have to give up his state Senate seat. Even if he can't win, a well-fought placeholder effort against a safe Democratic incumbent could be the ticket to bigger things for Owen Hill down the road.

Bottom line: today, in this race, Hill evokes the GOP's weak bench in Colorado. In ten years, it may be different.