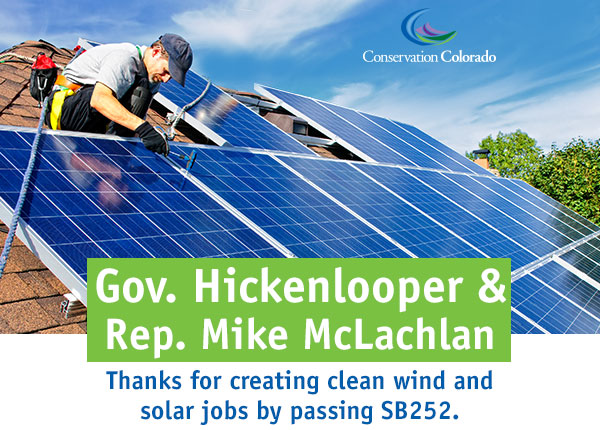 To thank the Governor and the legislative champions who made this law a reality, Conservation Colorado is launching a radio and online ad campaign across the state.

Listen above to one of our regional radio ads, this one thanking Senate President and SB 252 sponsor John Morse in Colorado Springs. Online and Facebook ads will also be running in these districts, thanking the Governor and key legislators for this momentous achievement.

In addition to showing goodwill between conservationists and Gov. John Hickenlooper following the signing of Senate Bill 252 into law, these ads also backstop a number of legislative Democrats such as Senate President John Morse and Rep. Mike McLachlan–both of whom have been singled out for attacks. In Morse's case, it's widely rumored that his co-sponsorship of Senate Bill 252 provoked energy interests to get involved in the recall effort against him, even though the bill exempted Colorado Springs Utilities. Certainly he'll be glad to see some support. Others benefiting from similar ads include Rep. Diane Mitsch Bush, Rep. Leroy Garcia, Rep. Millie Hamner, Rep. Mike McLachlan, Sens. Jeanne Nicholson and Angela Giron, and Rep. Ed Vigil.