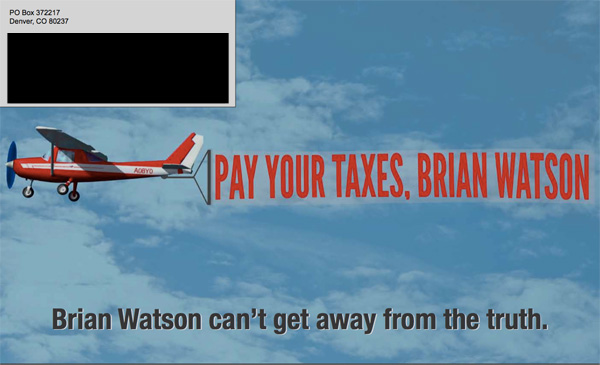 Showing that he’ll say or do almost anything to win an election, Congressman Mike Coffman is scheduled to host a fundraiser today with R. Brian Watson, who just lost a bruising election in November following reports that multiple tax liens had been filed against him and his businesses over unpaid taxes.

“Congressman Mike Coffman decided to raise money from someone who lost an election after it was revealed there were multiple tax liens filed against him for hundreds of thousands of dollars in unpaid taxes,” said Brandon Lorenz of the Democratic Congressional Campaign Committee. “Congressman Coffman’s decision to raise money from Brian Watson shows he’ll say or do almost anything to keep his job in Washington.” [Pols emphasis] 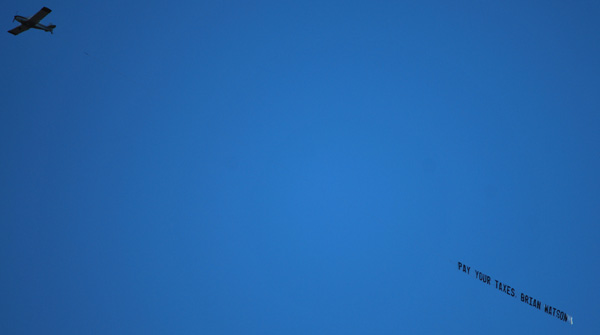 The battle last year between Republican Brian Watson and incumbent Democratic Rep. Daniel Kagan was particularly contentious, as Republicans had targeted the seat as one of their relatively few pickup opportunities. In the end this race went to the Democrats, as did basically every competitive legislative race in the state. Revelations that Watson and businesses owned by Watson had been held liable for hundreds of thousands of dollars in unpaid taxes–including over $200,000 in unpaid payroll taxes–were aggressively used against him by Democrats, in mailings, broadcast ads, and even a real plane towing the banner you see in the mailer above over House District 3 on Election Day (right).

Presumably, Watson and Rep. Mike Coffman figured that Watson's unpaid tax issue was in the past. We've even heard that Watson is thinking about a rematch against Rep. Kagan in 2014. That being the case, Watson slipping back into public view via a nice, cozy Coffman fundraiser seems like a great way to gauge reactions.

Unfortunately for both of them, good opposition research dies hard. For those watching CD-6 closely, it is notable that the DCCC is this active in the race in June 2013. If you had any doubt that Democrats think Coffman is a prime pickup opportunity, those should be forgotten.