When The Sheriff Is The Fringe

We were recently forwarded copies of the Rocky Mountain Gun Owners candidate questionnaire for 2010 candidates for county sheriffs, with some responses from now-incumbent sheriffs. As you are probably aware, an ad hoc coalition of county sheriffs is threatening to sue, along with the right-wing Independence Institute, to block the two principal gun safety bills passed in Colorado this year.

County sheriffs, appearing on television and at hearings in uniform, have formed a major front in the Republican attack on these bills. Insofar as these are sworn law enforcement officers, they are automatically, and rightly, given a degree of credibility.

Based on the RMGO questionnaires we're looking at, some of these sheriffs, including some of the most prominent in the gun safety battle, do not deserve that credibility. 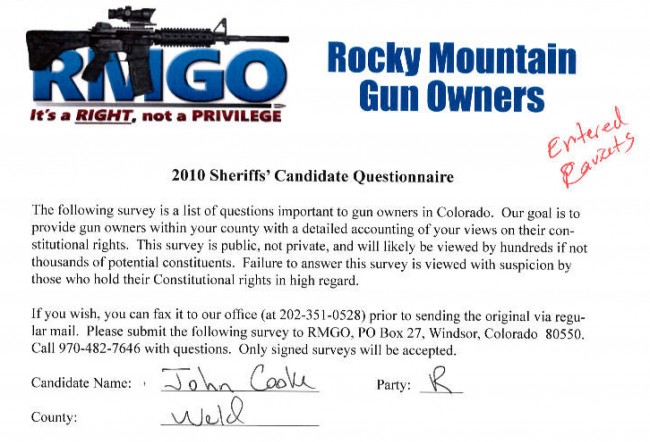 Weld County Sheriff John Cooke, the husband of the Independence Institute's Amy Oliver Cooke, has emerged as one of the most vocal opponents of House Bill 1229, requiring background checks on most transfers of guns.

As you can see in his 2010 RMGO questionnaire, Cooke also supports the repeal of Amendment 22, the law passed in the aftermath of the mass shooting at Columbine High School in 1999, closing the so-called "gun show loophole" and requiring checks for gun show sales. Amendment 22 passed in 2000 with fully 70% of Colorado voters in favor. Today, even the NRA's president says this was "reasonable," although they opposed it at the time.

Folks, understand what this means. Sheriff Cooke is distantly out on the fringe of the gun policy debate, far more than the news coverage of his opposition to these bills suggests. This man wants to repeal settled and uncontroversial law for the overwhelming majority of Coloradans, passed in response to one of the state's most horrific tragedies. If viewers knew that about Sheriff Cooke, they might honestly wonder why he has that badge.

Check out the rest of Cooke's RMGO questionnaire here. And stay tuned, because we have more on the way. In the case of many of these elected county sheriffs, what we have are politicians first, and lawmen second. In some cases, lurking behind that badge are some highly irresponsible politicians.