In a video this week from North Korean state media (above), reports the Washington Post, that nation details threats to launch missile attacks against the United States: specifically Honolulu, Los Angeles, Washington, D.C., and Colorado Springs, Colorado, the home of the U.S. Air Force Academy, Space Command, and NORAD. Unfortunately, this North Korean news report had a technical difficulty:

[T]he video, released by the state-run media organization Uriminzokkiri, misidentifies Colorado Springs’ location by about 1,000 miles. As the voice-over excitedly discusses North Korea’s plan to launch a missile at the home of a number of important military installations, as well as the U.S. Air Force Academy, a dot on a map meant to indicate the city actually appears somewhere over the deep south. [Pols emphasis]

You can hear the narrator mention Colorado Springs at about 1 minute, 20 seconds into the video, as a scary-looking line is shown shooting out from North Korea and landing somewhere in the vicinity of Shreveport, La., a 900-mile drive southeast from the intended target. 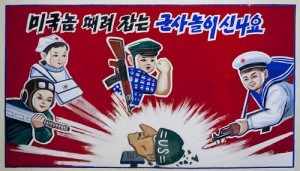 The scene from America the Beautiful Park (not).

If you're in Colorado Springs (or Louisiana), there's no need to panic just yet. So far, North Korea's KN-08 missiles are untested and do not have a demonstrated ability to reach the U.S. mainland.

We're going to go ahead and predict that Colorado Springs (or Shreveport) will not be hit by a North Korean nuclear missile strike anytime soon. This is not intended to make light of the worsening situation on the Korean peninsula since hereditary dictator Kim Jong Un came to power, or to say that North Korea's threats against regional targets they have proven the ability to strike should be taken lightly. But at some point, foreign nations who want to scare Americans in their homes will need to figure out how to avoid making themselves a punchline while doing so.

For starters, we suggest better maps.