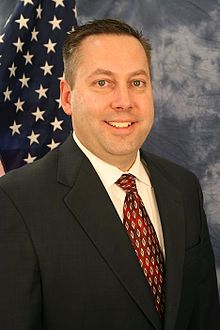 The man who relieved us of Rep. Doug Bruce.

After all 15 Senate Republicans voted against the budget last week, prompting strong criticism from Sen. Pat Steadman, D-Denver, who sits on the Joint Budget Committee and, a few days later, from the Denver Post editorial board, which echoed Steadman’s complaint that Republicans, after voting mostly in favor of budgets that had to be balanced the last few years with transfers and other gimmicks, refused to support a more measured, but expensive budget this year.

Unlike Senate Minority Leader Bill Cadman, R-Colorado Springs, who complained that the budget increases spending across the board, House Minority Leader Mark Waller, R-Colorado Springs, appears to be more concerned with the optics of his entire 28-member caucus voting against the bill, especially after seeing the criticism leveled at Cadman’s caucus…

Waller, who is almost certain to run for Attorney General last year, [Pols emphasis] would like to be able to demonstrate that he leads a group of lawmakers who are pragmatic and responsible; and helping forge a bipartisan budget compromise would help him make that case.

Rep. Waller's name has been floated as a potential candidate for Attorney General in 2014 a few times, but particularly with the sidelining of Weld County DA Ken Buck as he battles cancer, Waller could very easily become the GOP's presumptive nominee in this race if he gets in. Working hard to build his reputation as a better partner and good-faith negotiator than his predecessor Frank McNulty, an upcoming bid for AG would provide some perspective for this and a few other statesmanlike actions from Waller this year.

Incumbent AG John Suthers was appointed to the job before being elected in 2006. The solid wins he enjoyed were partly due to that, and a good campaign organization to push him through to relatively easy re-election in 2010. Waller will have neither advantage, of course, and next year's open race for attorney general could be the one Democrats have been waiting for to take this office back.