Just moments ago, I had the incredible honor of signing civil unions into law.

It was a historic moment for Colorado, which now joins a tide of hope sweeping the nation that affirms all couples should have the protections they need to care for each other and their families…

Today, we should all take a moment to reflect on the critical progress we have made, as well as the powerful difference it will make in the lives of thousands of families across our wonderful state.

Congratulations, and thank you for making Colorado a better place for each and every one of us.

UPDATE: The photo for the history books, courtesy One Colorado: 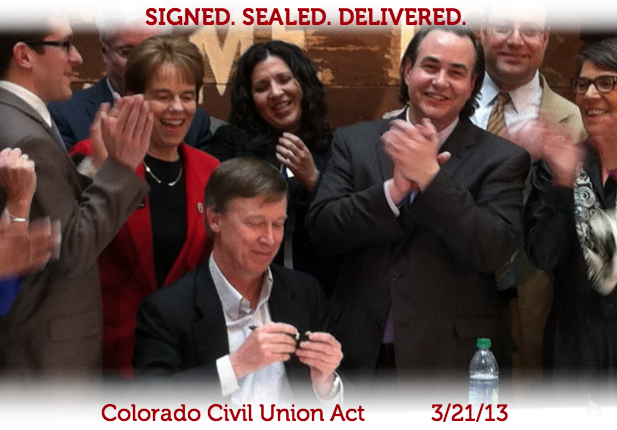 Via 9NEWS' Brandon Rittiman, they've got the certificates ready, though May 1st is still a few weeks away:

If you're interested in witnessing a bit of Colorado history, you can head to, appropriately enough, the Colorado History Museum at 3:15PM today for the signing of Senate Bill 11 into law by Gov. John Hickenlooper:

Democratic Governor John Hickenlooper is expected to sign the civil unions bill at 3:15 p.m. Thursday at the History Colorado Center.

After a three-year fight pushing for civil unions, Senate Bill 11 won final passage earlier this month on a 39-26 House vote with two Republicans joining the Democrats…

The bill marks a significant shift in a state where, just seven years ago, a constitutional amendment was passed to ban gay marriage. Colorado now joins three other states — Illinois, Delaware, and Hawaii — as a state that has both a gay marriage ban and a statute allowing for civil unions.