In a piece on the 5pm news about now-resigned CIA director David Petraeus and his affair with his biographer, Paula Broadwell, ABC News’ Denver affiliate put a photo of the biography on the screen, but the book had an awfully odd name.

The name of the Petraeus biography is, in real life, “All In.”

But gentle reader, that’s not the Google Image search result they ran with. Oh no. 7NEWS’ statement issued a little while after this cover was splashed on national blogs, via Westword:

It was a regrettable and embarrassing error. We are mortified this appeared during our 5 p.m. news broadcast. The editor pulled the image of the book cover from the Internet without realizing it had been doctored. We sincerely regret the error and have corrected the story to prevent any recurrence of its broadcast. We are following up internally as well, to avoid a repeat of this inexcusable oversight.

The lesson being for those who desire continued employment in television news: look carefully at images you find via Google Image search before you put them on live television.

The still image courtesy AmericaBlog is after the jump. As always, we implore our readers to keep their comments on a PG-13 (or R-rated from the 1980s) level. Thanks. 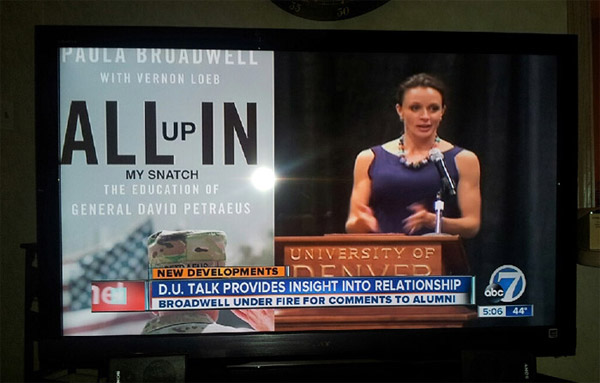