And So It Begins: The Race for Denver Mayor 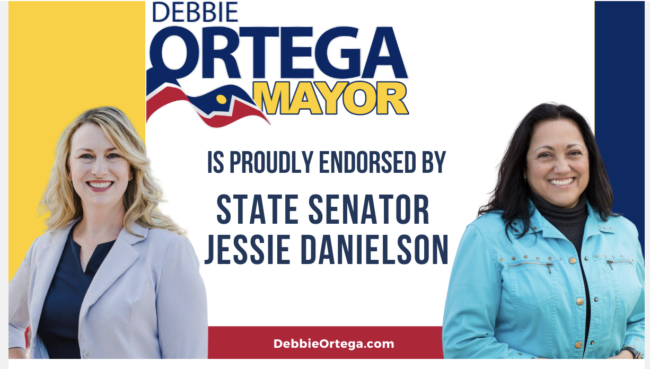 And so it begins…

The 2022 election was just officially certified this week, but the next election has already hit a notable milestone.

Behold, the first widespread touting from a campaign of an endorsement featuring a politician who has nothing to do with Denver!

We’re not hating on State Sen. Jessie Danielson endorsing Debbie Ortega. This is a perfectly fine endorsement. But Danielson represents SD-20, which is in Jefferson County (which is not in Denver).

Again, there’s nothing wrong with this endorsement. We point it out only because it marks an important threshold: When candidates for Denver Mayor start talking about the endorsements they have from people who are not connected to Denver, then it’s on like Donkey Kong. This is when you know that the race for Denver Mayor has gotten SERIOUS.

Historians may argue with us here, but the next stage in this campaign evolution is probably when we start seeing the “related to Denver but still kinda weird” endorsements. You know the ones — like Frank Azar or the guy inside the “Rocky” costume (the mascot of the Denver Nuggets).

Campaigns for Mayor of Denver are always a spectacle. The 2023 campaign for Mayor could be amazeballs. This year’s race takes place at that rare moment in time — roughly once a decade — in which there is no incumbent facing re-election. It’s an open seat, and that’s why there are 94 different people running (more or less). Lots of politicians have been waiting a long time for this race.

The waiting is over.