Denver Does Right By Bussed-In Migrants

THURSDAY UPDATE: As officials continue to unravel the mystery of a large busload of migrants who arrived in the city this week without advance warning, it’s looking less like political chicanery and more of a case of migrants helping themselves out of a bad situation. The Colorado Sun:

The city is still trying to learn more about an uptick of recent migrants to the city — including the origin point of a bus that delivered roughly 90 people Monday night — but said it has ruled out speculation the migrants were sent here by another state’s governor.

“There was sort of an informal gathering on social media among those folks themselves,” said Evan Dreyer, the Denver mayor’s deputy chief of staff. “This does not appear to be anything that was organized by another government entity to direct people to Denver. We do not think that was the case — no evidence of that.”

That’s a relief, and either way Denver is doing an exemplary job at providing for their needs. 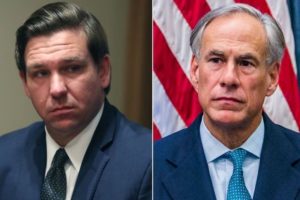 We’re monitoring a late-breaking story in downtown Denver today, after some 100 Spanish-speaking migrants arrived unannounced by bus yesterday in need of basic services, which fortunately the city has been planning to provide as needed in the recent months as dumping migrants in so-called “sanctuary cities” far from the U.S. border became a favored stunt for border-state Republican governors to pull. Denver7 reports:

Mayor Michael Hancock tweeted Wednesday that many of the roughly 100 migrants are asylum-seekers and refugees. Last month, the city welcomed a bus of about 50 migrants from El Paso, Texas. They were seeking asylum and were sheltered at a faith-based facility in west Denver.

Hancock tweeted, “Denver is and always will be a welcoming community, and we will support these individuals and families with the humanity and dignity they deserve while facing such a difficult situation. Our priority is the health and safety of all our residents, including those who are migrants. We will do what we can to provide for their needs at this time, including uniting them w/ friends, family, jobs & transportation to other destinations. We lead w/ compassion & we will never turn away from anyone looking to achieve a better life for themselves or their loved ones.”

The Denver Post’s Joe Rubino reports that the migrants who arrived yesterday appear to be from Venezuela, but the circumstances by which they boarded buses for Denver is so far unclear:

Through conversations with the immigrants, the city has learned that most are from Venezuela. A majority are between the ages of 20 and 40 but there are at least one or two children in the group, according to Ortega.

“They all speak Spanish and they all have told us they are migrants,” Ortega said.

There is still much the city doesn’t know including where the immigrants came from last or how they got on the bus. The city also does not have a description of the bus to share at this point, Ortega said.

“We are continuing to talk to them but their stories are not matching up on how they got here,” Ortega said. “I have to note there is a distrust in government. They are afraid.”

Although Denver has received busloads of migrants before, their transportation was generally by private charities and (key point here) coordinated with local relief agencies. That doesn’t appear to be the case with this latest round, leading Sen. John Hickenlooper to fear the worst:

Human lives are not political props. Denver will welcome these migrants with open arms and help any way they can. We will be empathetic to people put in a difficult situation.

Instead of playing partisan games, let’s tackle our broken immigration system once and for all. https://t.co/fHUUxV6iEl

That’s everything we know as of now, and we’ll update once the organizer claims responsibility. The lack of communication from whoever organized this is extremely irresponsible all by itself, and implicates a political motive. If this does turn out to be another Republican-engineered stunt to “draw attention” to the border by luring migrants onto buses under dubious pretenses, as with other cities targeted Denver will ensure these people are properly cared for and have their immigration cases processed in accordance with the law.

And then we can only hope it backfires politically.

These are people who need help, not trafficked as disposable political props.