TUESDAY UPDATE: As the Denver Post’s Conrad Swanson reports, freshman GOP perpetual outrage machine Rep. Lauren Boebert is taking the rare step of walking back this latest pronouncement, at least a little, after making unambiguously bad headlines across the nation:

“She meant to say weaker both times, not lesser,” Boebert spokesman Ben Stout said in an email. [Pols emphasis] “Congresswoman Boebert was explaining that while men and women are different, they complete each other in a beautiful way.”

That’s how the Bible verse reads (below), but it doesn’t seem much better overall, does it?

As readers know, we have a general policy of not responding to freshman GOP mother of all train wrecks Rep. Lauren Boebert’s nonstop firehose spray of provocateur outrages, crafted as they are to provoke us into amplifying with outrage Boebert cannot distinguish from praise.

But there are moments, and they do seem to be coming with increasing frequency as Boebert’s next reckoning in the November elections fast approaches, when to simply ignore what Boebert is spewing would do our readers and all of society a disservice–since this is the manifestly twisted thinking that powers her vote in Congress:

Boebert: We are created equal, we’re not the same, women are the lesser vessel, and we need masculinity in our lives to, to balance that, that so-called weakness, you know, just us being more frail and, uh needing that strength in our lives… 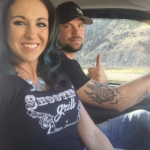 If you’re not aware that Boebert is in part quoting the Bible in referring to women as the “lesser vessel,” this will all come across as misogynistic in the extreme–and depending on your reverence for Scripture it might anyway. It is true that in 1 Peter Chapter 3, you’ll find a reference to women being the “weaker vessel,” but all this stuff Boebert tacks on about women needing a big strong hairy (inferring the hairy part) man in their lives to “balance” women’s “weakness” is male chauvinist claptrap that appears nowhere in the text.

Boebert’s interviewer Brad Stine, who unbeknownst to us until today bills himself as “America’s Conservative Comic,” had some facial expressions during Boebert’s commentary that say more about what’s going on here than we can decently write:

We don’t know about you, but the whole experience leaves us ready for a nice hot purgative shower! The only thing we can add is that this is the same Lauren Boebert Colorado Republicans from Joe O’Dea on down have not just tolerated but actively accommodated and praised, O’Dea in particular remarking recently how he has “respect” for the way Boebert “likes to use her voice.”

Imagine O’Dea trying to justify a lightning round of actual Boebert quotes.