🧵Asked about an ad and fundraiser claiming he's being censored by Big Tech, CO Senate candidate Joe O'Dea (R) says, "I got a crack team there, they found some anomalies. They addressed it with Google and they cleaned it up."
The ad and fundraiser are still live.
First:@KyleClark https://t.co/682cguuwzP pic.twitter.com/KBp11RWHjt

THURSDAY UPDATE: 9NEWS’ Kyle Clark investigates Joe O’Dea’s claim that Google is “censoring” his campaign, and just like Heidi Ganahl’s own improbable allegation about Facebook, all Google tech support would like to do is help O’Dea’s campaign figure out their problem:

A review of O’Dea’s ad history on Google, which is publicly available, does not indicate a pattern of ads being removed, and the O’Dea campaign declined to provide evidence of its claim.

They pointed to a screenshot of an ad posting reading, “Removed for a policy violation.”

Such notices are common and can be a result of something as simple as a spelling error or formatting issue with the ad. Advertisers, including political campaigns, often resolve these so-called ad disapprovals by correcting the issue or appealing Google’s determination.

According to Google, O’Dea’s advertising accounts have had a small number of violations, mostly due to formatting issues.

But again, why do it right when you can cry conspiracy? Either both O’Dea and Ganahl need to fire their entire tech departments, or they’ve decided a contrived sympathy ploy based on an unhinged conspiracy theory is worth more than, you know, actual ads.

Or it could be both! We can envision the sequence of events in which incompetent tech people claim Google is out to get them, and then equally incompetent campaign consultants decide that’s a campaign message in itself.

None of which makes any participant in this silliness look good. 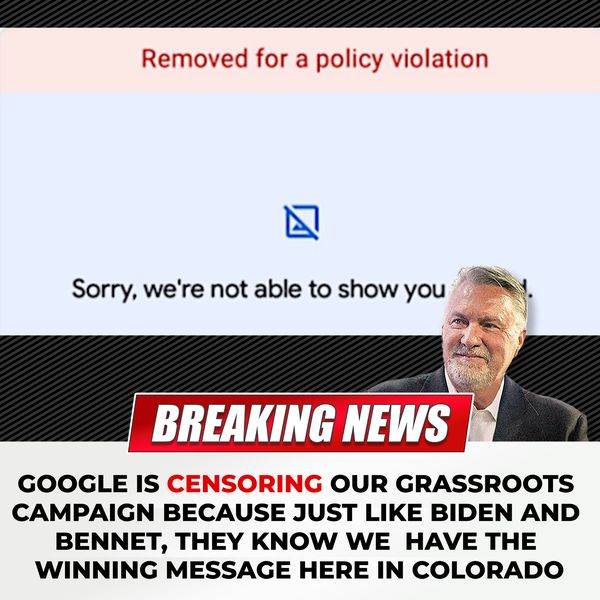 You’re reading that correctly, allegedly serious Republican U.S. Senate candidate Joe O’Dea, not generally lumped in with the ranks of Republican crazies who are expected to say crazy stuff, is accusing multinational tech giant Google of “censoring” his campaign for partisan political purposes by removing one or more of his campaign’s ads from circulation. There are no details backing up this sensationalist claim–what the content of the ad in question was, what terms of service it is alleged to have violated, or when the incident occurred. We’re being asked to take Joe O’Dea’s word that Google is singling out Joe O’Dea for political persecution, even though we’ve never heard O’Dea complain about Google like, say, Rep. Ken Buck does. Doesn’t it seem more likely that Google would retaliate against Ken Buck?

You know Democrat Michael Bennet is in serious trouble when left-wing Big Tech companies like Google rush to his aid by pulling my ads. [Pols emphasis]

They’re terrified that we can and will FLIP this 1 SEAT needed to reclaim the 50-50 Senate.

With just WEEKS left in this election, I’m counting on the help of grassroots Americans like YOU to help me counter this censorship by increasing the reach of our TV ads.

Please contribute to my Ad Fund to help me FIGHT BACK against this calculated censorship in the final weeks of the election – and I’ll *personally* MATCH your gift at the MAXIMUM 1,500% rate.

Whether or not you believe O’Dea when he claims that Google is out to get him probably depends on your susceptibility to conspiracy theory thinking in general, which we’ll concede includes a lot of Republican voters. Back here in the reality-based community, however, we have trouble with the idea that Google cares enough about Joe O’Dea, who has never once come close to taking the lead in Colorado’s U.S. Senate race, to apply a double standard from their usual terms of service to him. If it were to come out that Google actually did put its thumb on the scale of a U.S. Senate race in this way, it would obviously be a huge story with national, even global implications.

But we just can’t see why Google would put their reputation on the line to come between O’Dea’s “donors” and his laughable 1,500% “match rate.” If O’Dea has proof of something nefarious done to him by world’s second-largest technology company, he should immediately disclose everything, hire a team of lawyers, and let the Panama Papers-level crisis this revelation would call for ensue.

Something tells us that’s not going to happen.